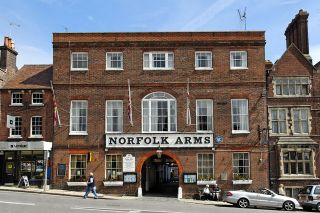 Arundel
The lovely West Sussex village of Arundel packs an awful lot into a small space. First and foremost there is Arundel Castle, the home of the Duke of Norfolk. The imposing castle is primarily 19th century, but is built around the remains of an authentic 12th-century castle, of which the keep still stands.

Beside the castle is Arundel Cathedral, a Catholic cathedral in Victorian Gothic style. Adjoining the cathedral is the ancient 14th-century parish church.

The parkland surrounding the castle is superb, with gentle walks along the River Arun, and through a landscape dotted with beech trees.

More self catering near Arundel >>

More bed and breakfasts near Arundel >>