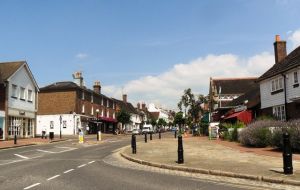 Lindfield village centre
A famous Sussex beauty spot, Lindfield is almost everyone's idea of a perfect English village. Lindfield is built above the River Ouse, at the edge of the High Weald. The High Street is lined with historic buildings in an attractive mix of half-timber, and later Jacobean, Georgian, and Victorian styles.

The first mention of Lindfield was in 765 AD, when the Saxon King Ealdwulf granted land here for the construction of a Minster church. The manor was later held by the Archbishop of Canterbury. The town was granted a market charter and the right to hold two annual fairs by Edward III in 1343, and the Lindfield sheep fair became one of the most active in the county. Those bucolic pursuits wee later supplanted by smuggling.

On one famous occasion in 1782 over 300 horses carrying smuggled goods were led up Lindfield High Street. The smugglers are said to have built a network of tunnels near All Saints church, but if the tale is true, there are no signs of the tunnels to be seen today!

At the edge of the town is Eastern Road Nature Reserve, an important 9-acre reserve with wetland habitat for birds, insects, and butterflies. A few miles distant is Wakehurst Place, a National Trust property which houses the countryside collection of Kew Botanic Gardens.

More self catering near Lindfield >>

More bed and breakfasts near Lindfield >>