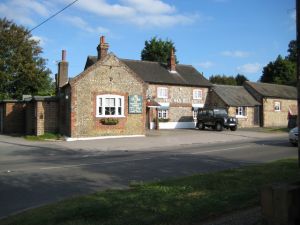 The Six Bells, Lyminster
A lovely village near the south coast of West Sussex. The settlement dates to at least the 9th century, for it is mentioned in the will of Alfred the Great. A famous tale is associated with Lyminster; it is said that a dragon terrorized the neighbourhood from its lair in a deep pool, known as Knuckler Hole, which can be seen northwest of the parish church of St Mary Magdalene.

The dragon became such a scourge that the king of Wessex promised the hand of his daughter in marriage to anyone who could kill the beast. A hero was found, though depending which version of the tale you listen to, this was either a gallant knight or a local farm boy named Jim Pulk. Whatever his identity, the hero killed the dragon after a fierce fight.

In the church is a Norman coffin slab called 'Slayer's Stone', said to be the resting place of the dragon-slayer. Arundel Castle can easily be seen from the village. This grand Victorian castle is built around the remnants of a genuine Norman motte and bailey castle.

More self catering near Lyminster >>

More bed and breakfasts near Lyminster >>