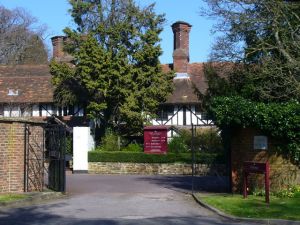 Ghyll Manor, Rusper
A quiet old village of lovely half-timbered buildings. Rusper grew up around a late 12th-century Benedictine priory, probably founded by a member of the powerful Braose family. The priory was under the leadership of an abbess, and was never very flush in the pocket, having at its height only seven sisters.

The priory was disbanded in 1537, leaving only the priory church, which now serves as the parish church. Of this building only the tower is medieval, the rest was rebuilt in the Victorian period.

At the base of the tower are the graves of a medieval prioress and four sisters of the priory. When the graves were relocated due to construction work an ornately decorated Limoges chalice was found interred with them. The chalice is now at the British Museum.

Within the chancel are two memorial brasses; the older, to John and Agnes of Kingsfold, daters to 1380.

More self catering near Rusper >>

More bed and breakfasts near Rusper >>