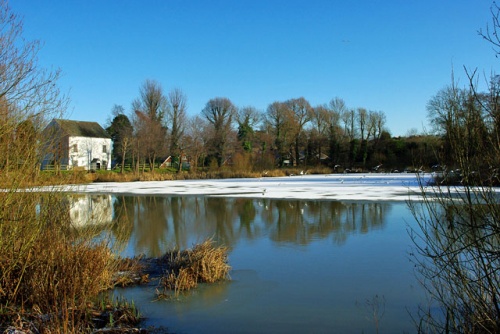 Ifield Mill
Ifield Mill is a working watermill dating to 1684. The mill was rebuilt in the early 19th century and worked into the 1920s. It was restored in 1974 by the Crawley Borough Council and is now operated by the Crawley Museum Society.

Ifield Mill is the only watermill in West Sussex to be powered by its original water source - in this case, the Ifield Millpond.

Ifield was a centre of the ironworking industry in medieval times, with hand-driven bellows operating small furnaces. When blast furnaces were introduced in the later medieval period they required more power to generate the intense heat required to smelt iron, so water power was used to operate bellows to feed the furnaces and drive the hammers. 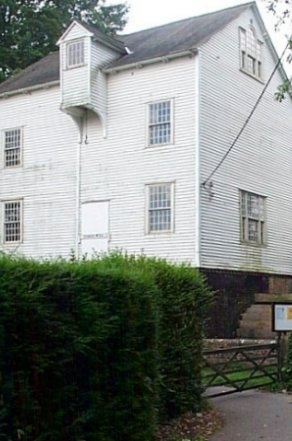 The Mill (c) Michael of Crawley

Water ponds were built, and the water collected in them was used to drive waterwheels connected to the furnace bellows. The millpond once served as a 'hammer pond', powering forge hammers for a medieval iron works.

The iron industry died out in the 17th century, in part because the area around Ifield was depleted of trees needed to create charcoal needed in the ironmaking process. When the iron industry died out a corn mill was erected on this site, probably sometime around 1660. The mill burned down and was rebuilt in 1683. You can still see one of the 17th-century stones from this building set into the wall of the present mill, built in 1817.

The corn mill remained in operation until the 1920s, after which the mill was abandoned and left to decay. The building was in such a poor state that trees grew up through the roof. It was rescued from collapse by a local charity and restored to partially working order, a process that took over 40 years.

The millpond is of an impressive size. The waterwheel still works, though the mill no longer grinds corn. The mill houses historical displays about the mill and the Crawley area. Ifield Mill is open on National Mills Weekend and monthly from May to September.

Four floors can be explored, with exhibitions on the history of milling, the West Sussex iron industry, and farming heritage in the Ifield area. Beside the mill is the original miller's house, now operating as a pub.

The mill is located just off Hyde Drive in Crawley.

More self catering near Ifield Mill >>