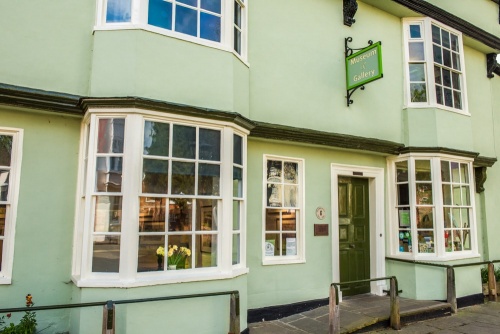 The Horsham Museum is located in a lovely timber-framed building on The Causeway; a suitable setting for housing the 26 galleries that make up the museum's collection of local history. The exhibits range from farm implements to costumes, a cabinet of curiosities, a Georgian Room, and a special 'Crime and Punishment' exhibit.

In addition, there are further displays covering flints and fossils, ethnography, toys, cooking, gardening, local trades, and British arts and crafts. Outside the museum are not one, but two walled gardens where visitors are welcome to stroll.

There are no less than 19 permanent galleries, and the range of themes covered in the galleries is quite remarkable. What follows are just some of the highlights we noted on our visit.

Though it sounds like it ought to be the Museum shop, this fascinating collection actually looks at historic shop goods, fixtures and fittings. See displays of Victorian and Edwardian trade signs, weights, measures, and packaging, including a recreation of the 'Williams & Smith chemist shop that once stood on West Street.

The museum holds over 3,000 items of apparel, and a portion of these are displayed in the Costume Gallery. Look for the 'Costume of the Month' display, and a recreated Costume Accessories store. The exhibit includes women's shoes from the 1690s to the present day, and covers hats, jewellery, purses, handbags, buttons, chatelains, and much more. 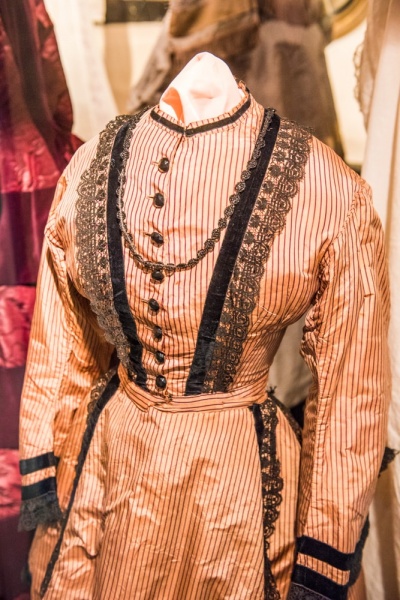 A Victorian dress in the Costume Gallery

This gallery houses the original door, padlock, keys and windows from Horsham's 1775 gaol. Stories of crime and punishment from the Museum archives bring to light famous and infamous crimes, such as the Acid Bath Murders, one of the most notorious crimes of the 20th century. See the door from the cell where murderer John Haigh was held.

The displays here look at saddlery in Horsham, with a recreation of the 1850s Albery's shop on West Street. The artefacts range from the everyday (a 1795 cart-horse harness) to the regal (a state harness used by the Turkish Ambassador at the Coronation of Edward VII in 1903). The museum holds over 1,000 pieces of saddlery from the Albery collection, and only a portion of them are on display at any one time. 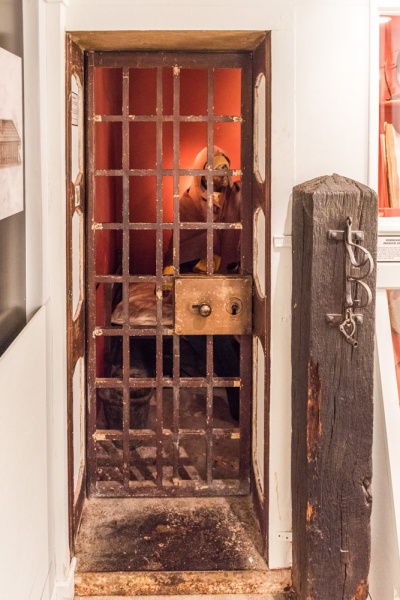 In the Crime and Punishment Gallery

This gallery looks at the contribution to archaeology of two prominent Victorian scientists, Thomas Honywood and George Bax Holmes. Honywood is credited with identifying the Mesolithic (middle stone age) period. He also discovered the Horsham Hoard of medieval pottery, established a museum. An avid early photographer, he also invented a process for 'nature printing'; creating designs direct from natural objects such as leaves and ferns onto paper, wood, or pottery surfaces. Bax Holmes was an early palaeontologist and discovered the Great Horsham Iguanodon.

This collection of oddities echoes the sort of display one might have encountered in a traditional cabinet of curiosities; the forerunner of modern museums. The range of 'curiosities' is remarkable, from a narwhal horn to Egyptian and Roman objects.

An even wide range of artefacts from around the world is held in this gallery, housed in the oldest part of Causeway House, built in the 1420s. Many of the objects were brought to Horsham by Charles and Emma Henderson of Sedgwick Park, near Nuthurst, who explored the Orient in the late Victorian period. There are also African weapons, an ornately carved Indian temple, and a 'dog of Fo' from China.

This gallery looks at childhood in Horsham over time, with objects including a medieval toy pot, an Edwardian dollhouse, a model railway engine, and children's books spanning the last 200 years. 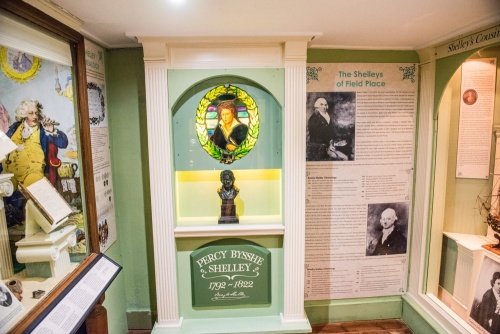 Horsham's best-known native is poet Percy Bysshe Shelley, born at Field Place, Warnham in 1792. Shelley died tragically at the age of 29 but by that time he had produced some of the most popular poems in the English language. The Museum has a collection of first editions of Shelley's work and writings by some of his literary circle, including his wife Mary Shelley, author of Frankenstein. The exhibit looks at Shelley's short life and his connections to Horsham.

Not the comedy film of the same name, Blazing Saddles looks at the history of transport in Horsham, with pennyfarthing bicycles, and the 1868 manual fire engine used by the Horsham Voluntary Fire Brigade. It took teams of 20 men to operate the fire engine, two groups of ten to take turns working the manual pump. Perhaps the most unusual object is a replica 'Pentacycle', commonly known as a 'Hen and Chicken', developed by Horsham architect Edward Burstow. 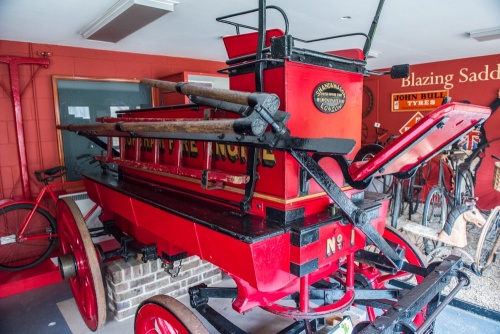 The 1868 fire engine in 'Blazing Saddles'

In addition to its outstanding permanent collections, the Museum hosts an ever-changing series of temporary exhibitions. When we visited one of the temporary exhibits was looking at the theme of Love and Marriage. The displays covered everything from historical attitudes to sex and prostitution to laws on marriage and divorce. The exhibition was exceptional, and very thought-provoking.

Over the course of decades exploring Britain, our family has visited hundreds of local museums. I don't think we've ever seen a better one than Horsham Museum. Be prepared to spend several hours. 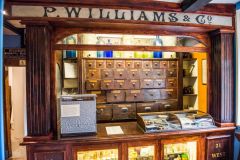 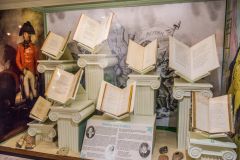 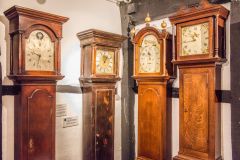 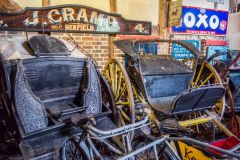 More self catering near Horsham Museum >>