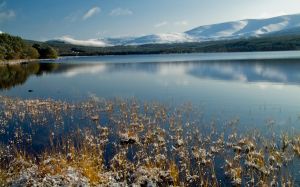 The Cairngorms was only declared a national park in 2003. It is the largest national park in Britain, covering an area of 3,800 kilometres (about 1500 square miles). The Cairngorms takes in a wide range of geographic features, with high mountains and moorlands, ancient forests, rivers and lowland lochs. It is a perfect area for outdoor activities, including walking, cycling, canoeing, and climbing. In addition, the park is rich in cultural heritage, including medieval castles, country houses, and remote estates.

At the heart of the park are the Cairngorm Mountains, an area of high peaks containing 52 Munros (peaks over 3000 feet), and four of the highest five mountains in Scotland. Here is the largest area of arctic wilderness in Britain.

This area of high peaks is bounded by the river valleys of the Spey, Dee, and Don. The rivers in the park are one of the few places globally to find freshwater pearl mussels. The Cairngorms are a popular destination for birdwatchers, with Golden Eagle, Dotterell, Capercaillie, and Crested Tit among the species to be seen. The most popular of all, though, is the osprey; the Osprey Centre at Loch Garten provides an opportunity to see these elusive (for Britain) birds in their natural habitat.

The park provides an important habitat for animals, vegetation, and insects, with over 1/4 of Scotland's species at risk making the Cairngorms their home. There are also large expanses of Caledonian pinewoods, of the type which used to flourish over much of Scotland. The extensive forest areas make the Cairngorms one of the best places in Britain to view spectacular Autumn colours.

The major towns in the park are Aviemore, Ballater, Braemar, Grantown-on-Spey, Kingussie, Newtonmore, and Tomintoul. Aviemore can claim to be the centre for winter sports in the UK, being well placed for ski areas at Cairn Gorm. Braemar is home to the best-known Highland Games, and is a short distance from the royal residence of Balmoral Castle.

Near Kingussie is Ruthven Barracks, an 18th-century army fort erected as part of English attempts to subdue the Highlands. Near Tomintoul is Corgarff Castle, a romantic medieval tower house. 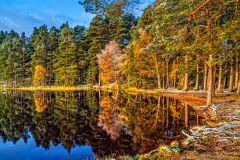 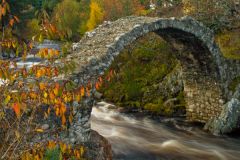 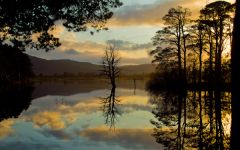 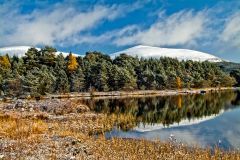 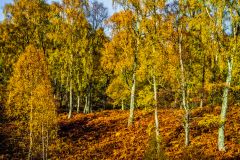