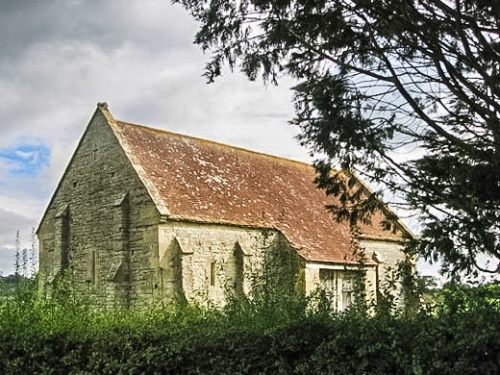 West Pennard Court Barn (c) Virginia Knight
West Pennard Court Barn is an early 15th-century tithe barn of five bays, with an unusual roof made of compacted earth. The barn stands in a lovely rural setting. Though of interest as an excellent example of a medieval farm building, the barn is most interesting for its unusual construction.

The barn belonged to Glastonbury Abbey and is one of 4 surviving barns once owned by the Abbey. It was probably built by the Sacrist of Glastonbury Abbey or his lessee and was intended to hold tithes from West Bradley parish. It is symmetrical in design, with a threshing bay in the centre.

At one end of the barn was a dovecote and you can still see remains of nesting boxes built into the barn gable end where the dovecote was subsequently lowered. The dovecote was altered in the 18th century to a calf house.

The keeping of pigeons was a status symbol, and only lords of a manor were allowed to maintain a dovecote. In this case, the Sacrist acted as lord of the manor. The West Pennard dovecote is unusual in that it was rectangular with gable ends, whereas most medieval dovecotes were circular.

The barn is built of blue lias stone with freestone dressing, under a roof topped with stone tiles on the bottom two courses and clay tiles above. There are porches in both the south and north walls. Each porch is supported by a pair of buttresses. The interior features cruck trusses set upon wooden blacks at the top of the walls, rising to collar beams and arch braces above.

In the Victorian period, the barn formed part of the rectory glebe. The barn was restored by the Society for the Protection of Ancient Buildings in 1938 and then granted to the National Trust.

NOTE
Admission by arrangement only. Keyholder is nearby. Also note that the barn is located in a farm field which may be damp in wet weather, so good footwear is advisable.

UPDATE
After many years of being looked after by the National Trust, the barn no longer appears on the Trust website and there are no details of current opening availability. We'll try to find out more and post an update on this page.

UPDATE #2
It appears that the barn is open, but only by prior arrangement with the keyholder, in the farm beside the barn. Please contact:

The exterior of the barn is easily visible from Scott's Lane, or from a public footpath immediately south of the barn. 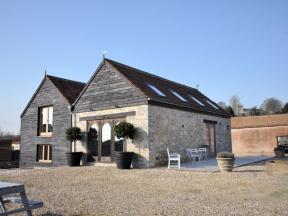 This property enjoys a rural location in the pretty village of Moorlinch with the welcoming village pub just a short walk away. Those who enjoy spending time in nature and …
Sleeps 8