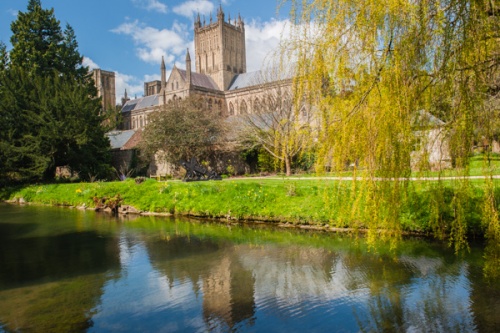 Wells Cathedral from the Bishop's Palace

Wells became a see in 909 AD, but in a tedious power struggle, the see was removed to Bath in 1090. Balance was restored in the 13th century when the see became shared between the two places.

There must have been an impressive building here during the Saxon and Norman periods, but the cathedral we see today was begun in 1176. The first great phase of building lasted until about 1240, during which the nave, north porch, choir, and transepts were built, in addition to the astonishing west front.

The next great addition was the chapter house, built from 1286-1306. During the 14th century, the east end of the church was almost entirely rebuilt, and the central tower finished. No sooner had the great central tower been finished than it became obvious that its weight was too great for the crossing.

The innovative solution to this architectural challenge was a set of strainer arches on each side of the crossing. These exquisitely decorative arches are pierced by wide circular holes, creating a diagonal cross said to be modelled after the saltire cross of St Andrew, to whom the church is dedicated. 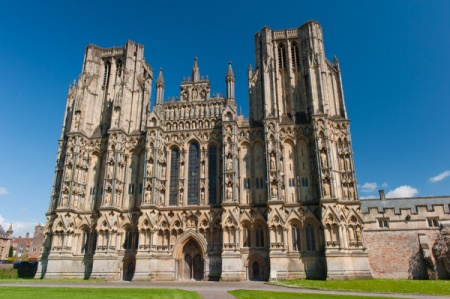 If you approach the cathedral from the market place, through Penniless Porch, don't immediately turn right to the cathedral entrance. Instead, walk into the centre of the wide green lawn that leads away from the west doors and look up.

Before you is one of the most glorious examples of medieval architecture in England; the west front of Wells Cathedral. Built in the 13th century and attributed to Thomas Norreys, this extraordinary piece of work is really art on a very, very grand scale.

The entire front, from ground level to the highest pinnacle, seems to overflow with statues, peering out from ornate niches, almost jostling for space. The effect is simply jaw-dropping, and almost completely overwhelms the three west doorways, which have been compared to a trio of rabbit holes set in a mountainside.

Norreys' original design called for towers topped by spires rising on each side of the screen, but these were never built, perhaps due to lack of funds or the death of the designer. In their place are two square, sturdy towers, erected in the 14th and 15th century.

These rather squat towers do seem out of place but at least they bring your eye inexorably back to the extraordinary screen carvings. The carvings are arranged in five bands. The bottom layers show statues of saints and worthies of Wells, angels and figures from Bible stories.

On the gable are three further bands, rising from nine angelic orders to twelve apostles, and finally to a depiction of Christ on the Day of Judgement. The effect is simply astounding; even more so when you consider that the statues would originally have been colourfully painted. 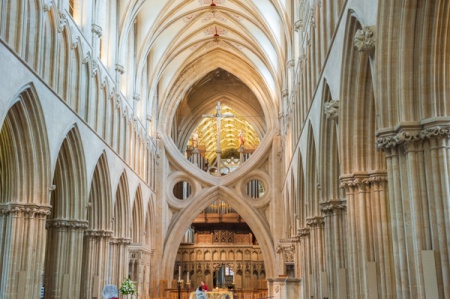 The nave and scissor arches

On entering the cathedral, look down the nave and you will see the 'signature' view of Wells; the extraordinary scissor arches that support the crossing. The criss-crossed supports are properly called strainer arches but are popularly known as scissor arches for the very simple reason that they resemble an open pair of rather elegantly curved scissors.

So striking are the arches that they almost overshadow the wonderful symmetry of the nave arcades, and the highly decorated piers, which have arguably the finest stiff-leaf foliage carving in England.

High on the west wall of the north transept is one of the most popular and endearing attractions of Wells Cathedral; a 14th-century astronomical clock thought to be the second oldest mechanical clock in Europe. Each quarter hour, an amusing little character called Jack Blandifers emerges from within the clock and strikes two bells with hammers, then two with his heels. When the bells strike, a pair of jousting knights emerge above the clock face.

The clock face is astronomical, marked with phases of the moon and the time since the last full moon, in addition to a full 24-hour dial. It shows the Earth at the centre, with the Sun and Moon revolving around it. The mechanism was built between 1386-1392, and while the clock face is original, the mechanism was replaced in the Victorian period and preserved in the Science Museum in London, where it continues to function.

The same mechanism that drives the astronomical clock also drives a clock on the exterior wall. The exterior clock is a relative newcomer, built 70 years after the interior clock. The external clock has a pair of quarter-jacks in the shape of armoured knights. 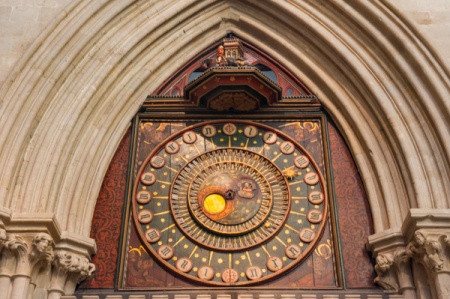 One of the delights of Wells is the wealth of marvellous carvings that adorn the column capitals. These are at their finest and most accessible in the south transept. One shows a man in the grips of a horrible toothache, another shows workers in a vineyard, another depicts a lizard eating berries.

The most famous of the carvings is a sequence called The Wages of Sin that decorates a large clustered pier like a cartoon strip. This sequence shows miscreants breaking into an orchard to steal fruit, being caught by the farmer, and beaten mercilessly.

The exquisite Chapter House was begun around 1286 and is one of the high points of 13th-century architecture in Britain. I would not be at all surprised if people come to Wells just to see the chapter house and ascend the very worn set of wide stone stairs.

The chapter house is amazing, with its central pier sprouting 32 vaulting ribs, but the staircase to reach it is equally notable; it curves and undulates like flowing water. When you enter you are immediately struck by the sheer height of the vaulting, supported on that one clustered central shaft.

On a sunny day, light streams into the chapter house, creating vivid coloured patterns on the floor and the stone seats around the outside of the chamber. The sense of space is enhanced because the floor is kept completely clear, creating a huge, echoing space.

Look carefully at the carved heads decorating the stalls; each is unique. Some are fearsome, even grotesque. Some quite obviously represent important people; church officials or patrons perhaps. and some are engagingly humorous, with comical expressions. 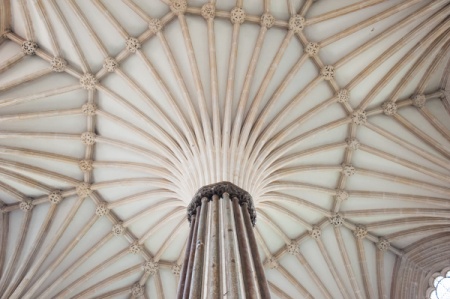 I would be remiss if I didn't mention the Bishop's Palace. Situated directly beside the cathedral, the moated palace has been the seat of the Bishop of Bath and Wells since before the Norman Conquest. The Palace is regularly open to visitors, but even when it isn't you can usually stroll around the moat and watch the swans swimming as they have done for centuries.

Two large and impressive gateways lead off the ancient market place in Wells. One gives entrance to the Bishop's Palace grounds. The other, tucked away in the extreme corner of the market square, leads to the cathedral.

This decorative, covered gateway is known as Penniless Porch for it was here in the Middle Ages that beggars would congregate, protected from the worst of the weather, and beg alms of people passing to and from the cathedral. The custom seems to be reborn, as every time I've visited over the past several years there have been modern beggars inside the Porch.

After you've visited the cathedral, spare a few minutes to wander around the north side, onto Cathedral Green (that's the name of the street, not the actual green). A hundred yards along you pass under an arch and to your left is Vicar's Close, built in the 14th century for vicars serving the cathedral.

Vicar's Close is the oldest intact medieval street in Europe. The houses are occupied, so you can't peer inside them, but you can freely wander along the Close and enjoy the peaceful ambience, cut off from the sights and sounds of the outside world. 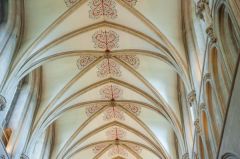 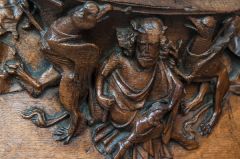 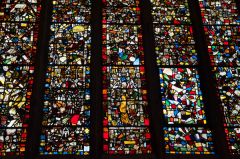 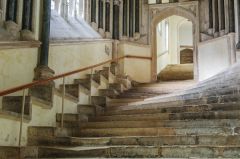 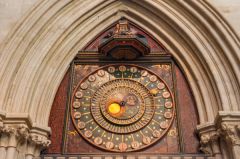 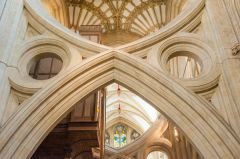 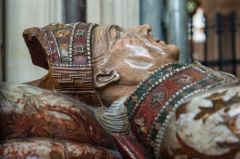 More self catering near Wells Cathedral

Self Catering near Wells