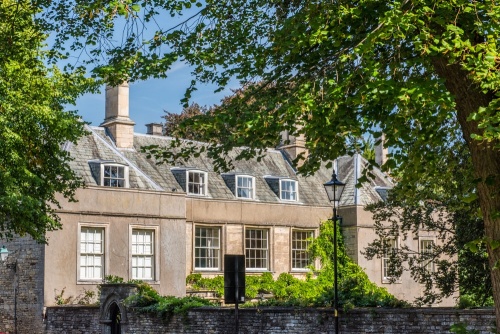 Grantham House from St Wulfram's churchyard
Grantham House is a lovely townhouse dating to the 14th century (approximately 1380). The house was heavily remodelled in the 16th century to form a beautiful Elizabethan building. A date stone on the chimney stack shows 1574 as the date the rebuilding was completed.

The house was given a Georgian facade on the south frontage around 1735. This gives the building a bit of split-personality; Tudor on one side, Georgian on another. Add to that a 13th-century doorway in the garden wall and you have a house that spans the centuries and retains reminders of them all.

The interiors show how Grantham House was gradually rebuilt over the years so that it represents an intriguing mix of architectural styles covering many centuries. The house is surrounded by seven acres of attractive walled gardens which run down to the banks of the River Witham.

The house was built of Ancaster stone, a hard limestone also used to construct the parish church and the nearby Old Grammar School, where Isaac Newton was educated. It has a roof of Collyweston slate tiles. 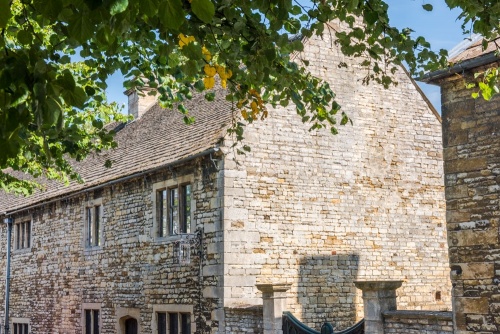 Though we do not know who built the house, we do know that it was owned by the Hall family by the 15th century. For that reason, it was formerly known as Hall Place. One of the Hall family owners was Arthur Hall, an Elizabethan scholar known for translating Homer's Iliad. The family were well connected and welcomed important visitors including Cardinal Wolsey and Margaret Tudor, Queen of Scotland.

The house is owned by the National Trust but leased to a private owner so opening times are limited and are generally only by pre-arranged tours. Guided tours last about 30 minutes, and take in the ground floor of the house.

The house entrance is on Castlegate, opposite St Wulfram's churchyard.

More self catering near Grantham House >>