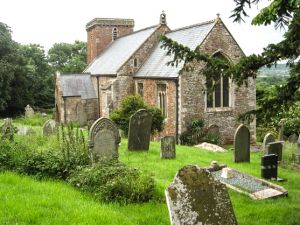 Clapton-in-Gordano, St Michael's Church
A 13th-century church incorporating parts of an earlier 12th-century building. The church stands above the Court House manor. The oldest feature is the 12th-century tympanum, or arch over the south door.

Within the church is a 14th-century font and a carved 13th-century carved screen that was originally installed at Court House where it separated the buttery and great hall. There is a grandiose Georgian monument and some very fine medieval carved ornamentation. The wooden pews at the west end of the church have been tree-ring dated to 1423-1453.

In the north chapel are monuments to the Arthur family and an oversized 17th century memorial to Edmund Wynter, who died in infancy in 1671. The memorial was intended to commemorate the entire Wynter family, but in the end, only baby Edmund was buried here.

The first written record of the church comes from 1226, but it seems likely that there was a much earlier church on the site, possibly built atop a sacred pagan site. It was developed by descendants of the Berkeley family of Berkeley Castle and restored in the Victorian period.

The church was declared redundant in 1995 and passed into the care of the Churches Conservation Trust. Occasional serves are still held, however.