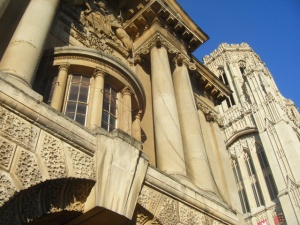 A Family Visit to Bristol Museum

Yesterday we went to Bristol’s City Museum and Art Gallery. We saw an Egyptian exhibit, some fossils, some stuffed birds and animals, and lots of rocks.

The Egyptian exhibit was well done and fairly extensive. There were several sarcophagi and mummies, all with really clear painting and hieroglyphics. All the artefacts were clearly displayed. The interpretative panels had interesting information about Egyptian life and belief and death.

The only drawback was that most individual artefacts had no labels to say what they were or where/when they were from. Mostly this was all right, as most things were recognizable If you like ancient Egypt, it is worth a visit. Sorry, I forgot a drawback, there were hardly any benches.

There are several exhibits in the museum with fossils. A landing on the way to the first floor has several ichthyosaur and other Jurassic sea creature skeletons including a tiny plesiosaur. The dinosaur exhibit on the first floor contains mainly fossils of the Triassic period found in the Bristol area. Interesting if you are interested in dinosaurs, but they are not the popularized dinosaurs everyone would recognize, so no t-rex or triceratops.

The item that interested me was some of the iguanodon bones discovered by Dr. Gideon Mantell, who is famous for starting the dinosaur craze back in the early 19tth century. Also rather intriguing was some fossilized vomit.

The other area with fossils is the geology exhibit. This has numerous plant and sea creature fossils, but the part we really liked was the exhibit of minerals in crystal form, with a large example of fluorescence. Most of the geology gallery is laid out in order of geologic time scale and is definitely the place to take budding geologists. This is the part of the museum where we really noticed the lack of benches.

Another animal-related area was a gallery of stuffed British birds and mammals - presumably from an age where people collected animals with a shotgun rather than a camera. The advantage was that you get a definite sense of size. Golden Eagles are huge, so are otters, and stoats are so small you wonder how they can catch rabbits, much less carry one home.

The upper floor had some rather gorgeous paintings mostly from the 18th and19th centuries. These were in a variety of styles, and of a variety of subjects – a few straight portraits, some paintings from stories/poems like La Belle Dame san Merci, some landscapes, and some people-scapes. I found myself standing in front of them and wondering about the people in them and their lives. And best of all, there were benches in almost every gallery to sit on.

As well as the above, which took us a couple of hours to look through, there are galleries with porcelain, glass, silver, and Eastern art. There are family trails available as well as various activity areas for children scattered throughout the museum. Small World is an area for 0-5 year olds which has dress-up clothes, books, and beanbags. The museum has a wide variety of lectures and family-friendly activities throughout the year. Check for dates and times on the museum website.

This review was co-written by myself and an 8 year old.  We enjoyed the museum and would recommend a visit.

More self catering near Bristol City Museum and Art Gallery