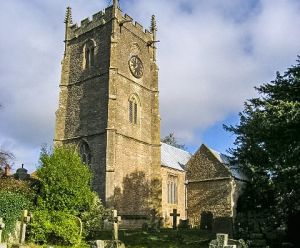 Brockley, St Nicholas Church
St Nicholas' is a small medieval church dating to the 12th century. The building was enlarged in the 13th century, and a west tower was added in the 15th century.

The building was restored in 1820, and as a result, much of the interior furnishings reflect early 19th-century ideals and taste. There is a very fine pew in the south transept for use by the Pigott family. The Pigott family 'enclosure' even had a separate entrance and a fireplace for comfort.

There are several Pigott family memorials, including one very fine late 18th-century marble monument to Colonel John Pigott. More ancient is the 12th-century Norman font and a fine stone pulpit dating to roughly 1480.

The church is built of rubble dressed with freestone and is composed of a nave, chancel, north and south chapels, south porch, vestry, and a very sturdy west tower which has a projecting polygonal stair to one corner. The south door dates to the 12th century.

Brockley church is no longer in regular use and is cared for by the Churches Conservation Trust.