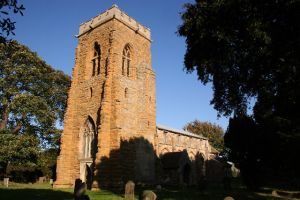 Yarburgh, St John the Baptist Church
St John's is an attractive medieval church built of local sandstone in 1405, after a fire destroyed the previous church on this site. This makes it particularly interesting, as much of the architecture dates solely from the early 15th century. You can see evidence of the 15th-century fire on the darkened stonework of the nave arcade.

The most interesting feature of St John the Baptist is the finely carved west doorway. Among the many carvings that adorn the doorway are figures of Adam, Eve and the serpent, the Lamb of God, a pelican, leaves, fruit, and other Biblical symbols. Running around the edge of the outermost order is an inscription in Lombardic text which reads:

'Wo so looks thys work upon, pray for all that yt begun'

You enter the church through a gabled porch protecting a 14th-century doorway. The north nave arcade dates to the 15th century and is decorated with later 19th-century carved heads. In the north aisle is an ornately carved piscina.

The font is quite plain, and dates to the 14th century and the tower screen is a century later. In the tower are lead slates carved with likenesses of ships. The tower holds a ring of three bells, the oldest being cast in 1370.

The church was heavily restored in 1854 by architect James Fowler of Louth, who had a hand in restoring many Lincolnshire churches during the mid-Victorian period.

Yarborough church was declared redundant in 1981 and is now in the care of the Churches Conservation Trust. It is normally open daily to visitors.

More self catering near Yarburgh, St John the Baptist Church >>