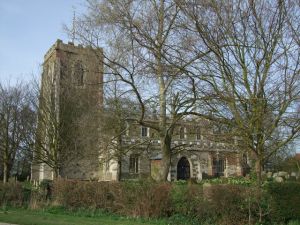 Theddlethorpe, All Saints Church
A 14th-century country church with Norman origins, Theddlethorpe has sometimes been called the Cathedral of the Marsh, a testament to its impressive length and spaciousness, as well as the quality of the exterior carving detail.

The church was constructed around 1380, and the exterior presents a rather peculiar appearance, mixing local greensand stone with pale limestone and red-brick to create a rather motley appearance. The timber roof is especially fine, as is the carved wooden rood screen.

One of the most interesting interior features is a memorial brass in the south chapel. This brass, dated to 1424, depicts an armoured knight, clad in a style of armour already obsolete when the brass was created.

The screens separating chapels from the aisles are carved with a variety of grotesque creatures and grimacing faces. The pulpit is Jacobean, and the altar table is Georgian. There is one odd touch inside the church; a lead sheet on the wall with an 18th-century graffiti drawing of a ship and the outline of a foot.

More self catering near Theddlethorpe, All Saints Church >>

More bed and breakfasts near Theddlethorpe, All Saints Church >>