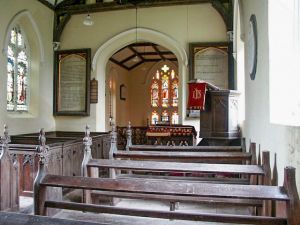 Haugham, All Saints Church
A Victorian Gothic church with a lovely spire built in imitation of that at nearby Louth, looking almost too slender and delicate to be built of stone. All Saints was erected in 1841 at the instigation of then rector, Rev G A Chaplin.

The interior is an almost untouched example of early Victorian Gothic Revival, with a royal coat of arms crafted in cast-iron. There are a set of Commandment Boards and richly coloured stained glass.

There was a priory founded at Haugham in the 11th century by Hugh de Abinois, the first Earl of Cheshire. The medieval church at Haugham did not appear to have any relationship with the priory.

That medieval church was replaced, starting in 1837, with the current church, which was itself declared redundant in 1981. A few memorial slabs were rescued from the medieval church, as was the font. The timber roof is particularly fine.

More self catering near Haugham, All Saints Church >>

More bed and breakfasts near Haugham, All Saints Church >>