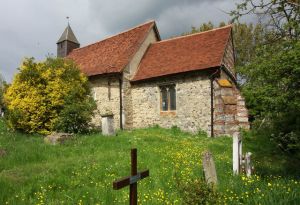 Vange, All Saints Church
Now encroached upon by the ever-widening sprawl of urban Basildon, the simple country church of Vange dates to the Norman period and is the oldest church in Basildon.

This is a very plain church, built of ragstone and flint, consisting only of a nave, chancel, and porch. There is no tower, just a timber bellcote at the west end, rising above a red-tiled roof. The interior is almost bare, with whitewashed walls. The core of St Mary's dates to the 12th century, with the addition of several 15th-century Perpendicular windows and doors.

The church was completely restored in 1896. Even then the interior was illuminated by oil lamps. It was not until 1931 that electric lights and heating were installed.

A Norman window is set in the south wall of the nave. The font dates to the 12th century and is composed of a square bowl supported by five columns. One side of the font bowl is carved with traditional Norman chevron symbols.

The south doorway is 15th century and there are remnants of 13th-century wall paintings and 17th-century wall tablets in the chancel to members of the Maule family. The list of rectors goes back to 1328.

The church was declared redundant in 1996 and is no longer used for regular worship. It is cared for by the Churches Conservation Trust and is normally open daily to visitors. The easiest way to reach the church is off the A13 at the Five Bells exit, on the southern fringe of Basildon.

More self catering near Vange, All Saints Church >>

More bed and breakfasts near Vange, All Saints Church >>