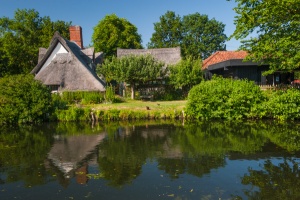 John Constable was born June 11, 1776, in East Bergholt, Suffolk. His father was a wealthy corn merchant. Constable was educated at Dedham Grammar School, and after he left school he worked in his father's business. His heart was not in it, however, and in 1799 he induced his father to send him to the Royal Academy in London to study art.

A fellow student at the Royal Academy School was JMW Turner, but the two men never became friends. Constable exhibited his first painting in 1802, but unlike Turner, success eluded him. He sold only 20 paintings in his lifetime, and was never recognized in his homeland while he was alive.

In 1816 Constable became financially secure with money left to him when his father died. He married Maria Bicknell despite the opposition of her family. The couple were happy together, and Constable was plunged into depression when she died in 1828.

Constable rejected the formal or "picturesque" rendering of nature found in the works of artists like Gainsborough. Instead, he tried to capture informally the effects of changing light and the patterns of clouds moving across the country sky. He loved the countryside, and his best work was of outdoor scenes in his native Suffolk and his London home in Hampstead. 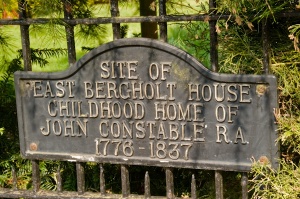 He worked in the open air, though he returned to his studio to finish his paintings. His larger scenes were sketched full-size in oil, and the sketch was then used as a model for the finished painting.

In France Constable found the success that eluded him in England. His 1821 master work The Haywain was exhibited at the Paris Salon of 1824. Constable's work greatly influenced the French artist Delacroix, and the so-called "Barbizon School", who followed Constable's lead in working outdoors. Later still, the French Impressionists built on Constable's efforts to capture the moods of light.

It was not until 1829 that Constable was reluctantly awarded full membership in the Royal Academy (and then by a majority of only one vote). He continued to struggle for commercial success and was forced to take on some portrait work to make ends meet.

To see in Britain:
"Constable Country", Suffolk. Constable's greatest joy was painting his native Dedham Vale, the valley of the River Stour around Dedham and East Bergholt. Many of the scenes that Constable painted can still be appreciated today, as can Flatford Mill, owned by Constable's father, and Willie Lott's Cottage immortalised in "The Hay Wain". Bridge Cottage, adjacent to Flatford Mill, boasts a museum based on the artist and his life.