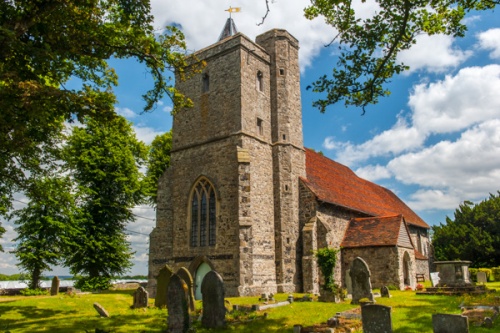 A remote church thought to be the inspiration for the opening scenes of Charles' Dickens work, Great Expectations. St James stands in an isolated spot on the edge of a marsh south of the Thames estuary. 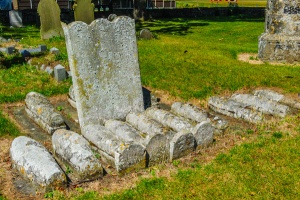 Pip's Graves in the churchyard

The 18th-century historian Edward Hasted thought little of Cooling, calling the village 'an unfrequented place, the roads of which are deep and miry, and it is as unhealthy as it is unpleasant', A modern visitor, seeing St James' church today, will find it hard to lend much sympathy to Hasted's harsh evaluation of this lovely, peaceful hamlet overlooking the Thames estuary.

In the churchyard are the moving tombs of 13 babies known collectively as 'Pip's Graves'. These 13 tombs are only about 18 inches long and are aligned in two neat rows beside a larger gravestone. Dickens described the tombs in poignant terms in his novel, and indeed it is hard not to feel a lump in your throat seeing the tiny grave markers.

Dickens came often to Cooling, walking from his home at Higham, and used to picnic with his family in the churchyard, laying out the family meal on the large table tomb next to Pip's Graves. The author's son, Charles, said that his father loved Cooling more than any other church. It is interesting that Dickens described 5 infant graves in his book, perhaps thinking that reducing the number from 13 made it more believable. 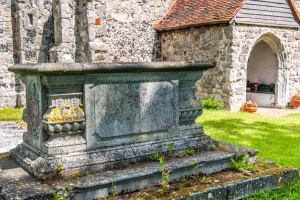 The table tomb where the
Dickens family had picnics

Who is buried in Pip's Graves?

The infant graves are ranged on either side of a large headstone commemorating Michael and Jane Comport. East of the large headstone are 10 graves of Comport children of Cooling Court and Cooling Castle. They range in age from 3 months to 17 months at the time of their deaths.

It is impossible not to view the tiny grave markers and feel a twinge of sadness. It really brings home in a very poignant way how high infant mortality rates were in earlier times.

The church itself is 13th century, with a wonderfully carved set of Early English stone seats in the chancel. There are also carved wooden pews in the nave, and several ancient memorials. Among the latter is a monument to Lady Felyth Brook (d. 1508) the wife of Lord Cobham of Cooling Castle. If you walk up the road a few hundred yards you can see the restored gateway to Cooling Castle itself.

Another interesting memorial is a wall plaque to John Murton of Cooling Castle, who was a seaman aboard the 'Monarch' when he fell overboard and was drowned off Rio de Janeiro in 1852. The epitaph contains lines written by the ship's captain, describing Murton as 'one of the finest and best hearted seamen who ever trod a ship's deck'. 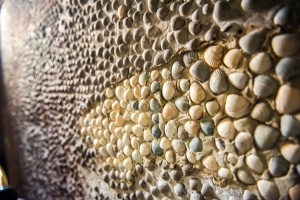 Shells embedded in the wall

At the west end of the nave are two sets of 14th-century benches, looking very much the worse for wear. The oldest feature in the church is the simple square font, which dates to the 13th century. It has 3 sides decorated with blind arcading in Romanesque style, but the 4th side is carved with a pair of unusual discs. The north door is 14th century, and shows its age. It still hangs upon its original medieval hinges, however.

Over the door is a royal coat of arms to Queen Anne. The frame is 18th century, but the painting is modern, after the original arms were stolen in 1993. The large east window has late Victorian stained glass by the famous firm of Clayton and Bell.

In the chancel are a triple sedilia and a double piscina, both 13th century, and an outstanding set of blind arcading. The arcading lines both walls and is purely decorative, meant, perhaps, to drive home the wealth and prestige of the patrons, the de Cobham family of Cooling Castle.

Though these features make St James a delight, the most compelling interior feature is the 19th-century vestry. This tiny room is lined with thousands of cockle shells (cockle shells being the symbol of St James, to whom the church is dedicated). The effect is quite amazing and makes you want to enter the vestry with a hush of reverence! 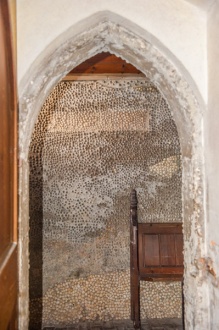 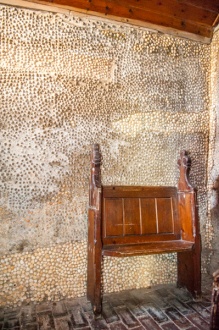 The back wall
of the vestry 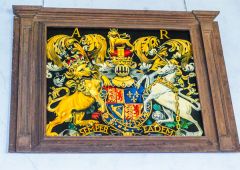 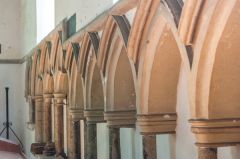 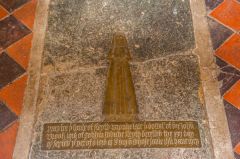