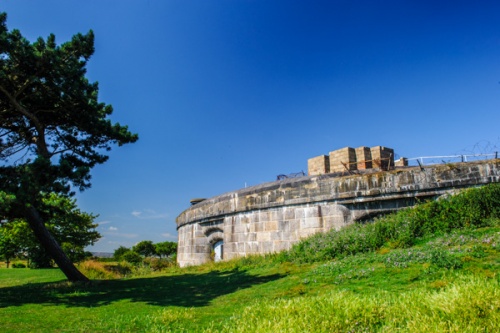 Coalhouse Fort occupies a strategic location on the north bank of the River Thames, fronted by saltmarshes. It was begun in 1861 to counter the threat of a French invasion and is one of the most important military sites in Essex. 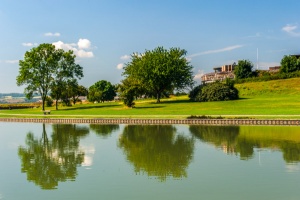 The water defenses and fort

The strategic importance of this area near East Tilbury village was recognised as far back as 1402 when a system of earthworks was erected to defend the village from a possible French attack. Then in 1540, Henry VIII built a blockhouse armed with 15 cannon as part of his system of coastal defences. Henry's blockhouse is now underwater due to erosion of the river bank.

Henry's fort was disarmed in 1553, and military focus moved to Tilbury Fort, 3 miles away. Fear of another French invasion in 1799 prompted a new fort to be thrown up at East Tilbury, with 4 24 pounder cannons. After Napoleon's defeat at Waterloo in 1815 the fort was abandoned for a time, then in 1855 it was enlarged to hold 17 32 pounder guns. Coalhouse was just one of several coastal forts to be built or strengthened in the mid-19th century, along with nearby Shornemeade and Cliffe.

The enhancements at Coalhouse were intended to counter the threat of new iron-clad ships developed by the French navy. To deal with the iron-clad threat, Coalhouse was supplied with massive guns that could fire armour-piercing missiles. The guns were so powerful that the when they were fired, the shockwaves could break windows 1/2 mile away. 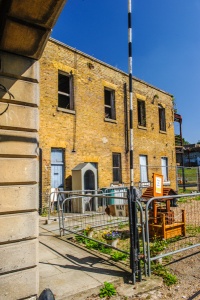 Barracks inside the
fort entrance

In 1865 Lt. Col. George Gordon (later to become General Gordon of Khartoum) supervised the completion of the forts along the Thames, including Coalhouse. The fort was completed in 1874. In its final configuration it held 3 9-inch shell-firing guns in an open battery, and 11-inch guns in bombproof casements. The casements were built of granite reinforced with iron, and 5 foot thick roofs of brick and concrete.

Over the next few decades further gun emplacements were added, including earthworks designed for quick-firing guns to defend against minefield laying. During WWII a pair of 5.5 inch guns from the HMS Hood were erected in shelters atop the fort roof, along with two anti-aircraft guns. These WWII defences were placed in the hands of the Home Guard in 1944.

The fort and the land surrounding it were purchased by Thurrock District Council in 1962 to create a countryside park. From 1983 the fort itself has been restored by a charity group of volunteers. The volunteers have created The Fort Museum, which covers the long history at Coalhouse with memorabilia gathered since the 19th century.

See a full-scale replica of a 38-ton Rifled Muzzle Loading gun and see what it took to load and fire this monster of a gun.

In addition to the Military Museum, you can visit the Thameside Aviation Museum, based at Coalhouse sine 1984. This small museum tells the story of the Essex Historical Aircraft Society, who have excavated over 40 historic aircraft since its inception in 1974. There is also a Remembrance Garden, cafe, and a shop housed in the old Guard Room by the fort entrance.

The fort is set in a lovely riverside park, with walks around a lake and along the shore. You can extend your walk to take in The Two Forts Walk, joining Coalhose to Tilbury Fort. Everywhere you look around the park are reminders of the Fort's military past, from old minefield control towers, a quick-fire battery, and mortar bases. Part of the site is defended by a dry ditch, others by a system of water-filled channels. 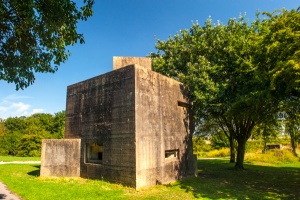 Blockhouse beside the fort

Coalhouse has become a popular destination for paranormal investigators; visitors have reported hearing eerie voices, and heavy footsteps following them down tunnels. Strange figures have appeared and disappeared, and objects move without anyone near them.

One spectre dubbed 'Harry' by volunteers, seems to inhabit the washroom area and has been known to throw chairs. I have to say that I didn't personally experience anything out of the ordinary at Coalhouse, but then it was a bright, sunny day in summer, so perhaps the ghosts were feeling lazy.

Coalhouse Fort is very well signposted off the A13 and A1013 between Stanford le Hope and Grays. Minor roads lead through East Tilbury village to a large parking area used for both the Fort and the surrounding park. There are trails around the fort, including the waterside defences, that can be enjoyed even if the fort itself is closed.

You can walk around the entire perimeter of the fort to get a very good idea of the layout and the secondary system of batteries along the shore. The fort is extremely impressive, though it is obviously still in the process of being restored. The views along the Thames estuary are fabulous.

I highly recommend making a joint visit with Coalhouse and Tilbury Fort, to see how the military presence here along the Thames changed over the course of 4 centuries. 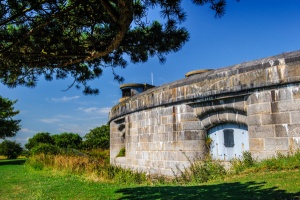 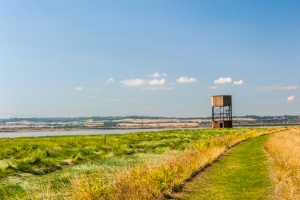 Radar tower at the river's edge 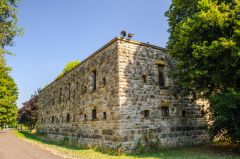 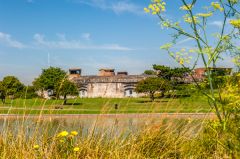 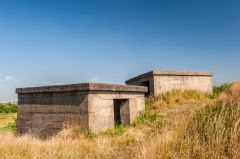 More self catering near Coalhouse Fort