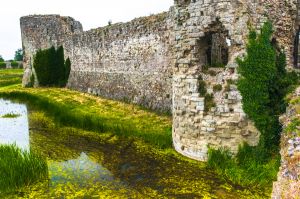 The Romans first built a fort on this site; and 700 years later the Normans built a moated castle within the fort walls. Used for military defences during the Second World War.

Around 290 AD the Romans built a fort they called Anderida on a peninsula of land jutting into an area of marshes at what is now Pevensey. The marshes surrounded Anderida on three sides, and offered a protected anchorage. Anderida is almost unique in that no civilian settlement grew up around the fort, probably because of the limited dry ground on the peninsula site.

The usual explanation for why the fort was built is that it formed part of the Roman's Saxon Shore system of coastal defenses, built to counter the threat of raids by Germanic pirates. It seems that a fleet was based here, acting in unison with a fleet across the Channel to stop pirate raids.

An alternative explanation is that the fort was built, or rebuilt, during a rebellion by Carausius, a Roman general who revolted and declared himself Emperor of Britain and northern Gaul in 286 AD. Carausius was assassinated by one of his followers named Allectus, who was himself killed in AD 296 when the Emperor Constantius Chlorus put down the rebellion.

The curtain wall surrounding the fort is fascinating to examine. The wall was built by different gangs of workmen, each responsible for a 20 metre section. Each section is slightly different, uses different techniques and materials, and there are very obvious breaks in the wall where sections join. 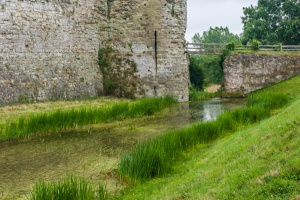 The medieval moat and inner bailey

After the Romans left around 410 AD the fort was occupied by civilians, who used the Roman defences to protect themselves from pirate raids. The defences did not help in 471 AD, when Saxons besieged the site and 'slew all the inhabitants; there was not even one Briton left there'. The Saxons themselves settled inside the fort in the 6th century, and by the 11th century Pevensey was a thriving fishing port.

On 28 September 1066 William, Duke of Normandy, landed in Pevensey Bay to launch his bid for the English throne. His men set up a temporary camp inside the old Roman fort before marching on to meet King Harold's army at the Battle of Hastings. The Bayeux tapestry shows the the Normans building defences after their landing, and is reasonable to surmise that this scene shows what happened at Pevensey.

After his success at Hastings, William gave Pevensey and a large swath of Sussex to his half-brother, Roger of Mortain. Sometime in the 1070s the temporary Norman defences within the Roman walls at Pevensey were extended to create a full-scale castle. The old walls were repaired and two baileys, or enclosed areas, were constructed, defended by a timber palisade.

It was not long before the Norman defences were put to the test, for in 1088 William's son Robert, now Duke of Normandy, rebelled against William II, who had succeeded his father as King of England. Barons supporting Robert occupied Pevensey Castle, and William II personally led royal forces in a siege lasting 6 weeks. The defenders eventually had to surrender when their food supplies ran out.

The Mortain's kept Pevensey, but not for long. William, Count of Mortain, rebelled against Henry I and the king seized his estates. Gilbert de Clare, Earl of Pembroke, later held Pevensey against King Stephen. Once more the castle proved impossible to capture by assault, but once again the garrison had to surrender when their supplies ran out. 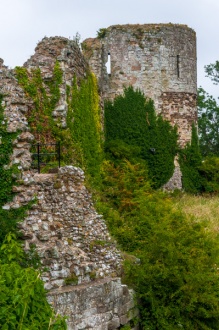 The crown took over Pevensey Castle once again, and it was under Richard I that the first serious stone fortifications were added in the 1190s, including a strong stone keep. The keep was slighted by King John in 1216 to prevent it being used by his rebellious barons. The castle was rebuilt once more under Peter of Savoy, the Earl of Richmond, around 1250, and the timber palisade defending the inner bailey replaced with a stone wall and guard towers.

The third major siege of Pevensey followed in 1264 when royalist troops fled here after the Battle of Lewes, pursued by Simon de Montfort. The rebels used the church towers at Westham and Pevensey to fire on the defenders, and caused huge damage to the castle, but after a full year De Montfort finally gave up.

Pevensey passed to Eleanor of Provence, Henry III's queen, and then to a succession of queens, who appointed constables to look after the castle administration. Some constables were accused of stripping the castle of its assets and selling off the material for profit.

The castle began to decay in the 14th century, and deteriorated quickly, with large sections of the walls collapsed and left in ruins. John of Gaunt, Duke of Lancaster, refused to garrison the castle, claiming that if the French attacked the castle he did not have the money to repair it. Local animosity to the Duke ran high, and in 1381, during the social uprising known as the Peasant's Revolt, a mob attacked the castle, roughed up the steward, and burned the court rolls (legal documents and tax records).

The fourth and final siege of Pevensey occurred in 1399, when the constable, Sir John Pelham, supported Henry Bolingbroke in his rebellion against Richard II. Richard's men besieged the castle, but the defenders held out. Bolingbroke took the throne as Henry IV and he and his Lancastrian successors used the castle as a prison for important nobles. James I of Scotland was held here, as was the 2nd Duke of York.

Perhaps the most interesting case of a noble prisoner was Joan of Navarre, second wife of Henry IV. Joan's stepson, Henry V, accused her of trying to kill him with witchcraft, and had her kept prisoner for 3 years. 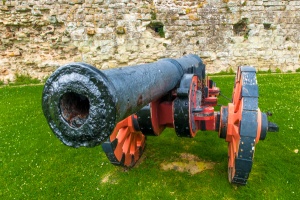 Elizabethan cannon
inside the inner bailey

The castle became a complete ruin during Tudor times. Elizabeth I ordered it to be razed, but her orders were not followed through. She may have had cause to be grateful that her commands were ignored, for the castle was refortified to counter the threat of the Spanish armada in 1588. One of the guns installed at Pevensey by Elizabeth is now on display inside the inner bailey. It is one of only a few cast-iron Elizabethan cannons to survive.

In 1940 the castle was used for the first time in 400 years, when the threat of a German invasion along the south coast was high. The military added new gun emplacements, but disguised them to look like part of the original medieval and Roman construction. The machine-gun posts can still be seen, though all other WWII defences have been destroyed.

The Roman west gate (nearest to Westham) still stands, defended by large D-shaped towers and the remains of a medieval gatehouse. There are D-shaped towers along the curtain wall, which is almost completely intact on the north, east, and west sides. You can easily see the Roman construction techniques in the stonework.

The inner bailey is defended by a spring-fed moat, and within the moat a high stone wall with rounded corner towers. One of the towers has a spiral stair leading to a basement storage area. Another has a simple hole in the floor, suggesting that the basement was used as a pit prison or oubliette (from the French word for 'forget', since the prisoners could simply be thrown into the prison and forgotten.

In the east this medieval wall joins the Roman perimeter wall. Most of the inner bailey defences are 13th and 14th century.

Perhaps the most interesting feature is the keep, now largely a ruin, but of an extremely unusual design, a rectangular block with 7 projecting towers.

You can see foundations of a small 13th century stone chapel within the bailey, and a well beside the chapel.

Pevensey is an incredibly impressive site. The pages of history were written here; from Roman rebellion to Saxon settlement, from Norman invasion and no less than 4 sieges, and from the Armada to WWII, it would not be too broad a statement to say that the story of Pevensey Castle is the story of English history. 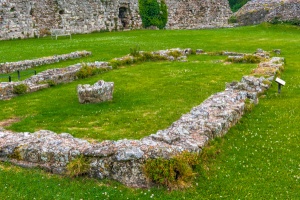 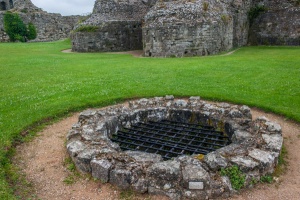 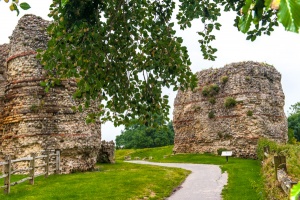 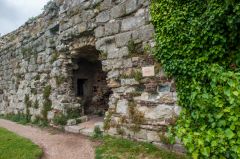 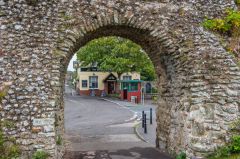 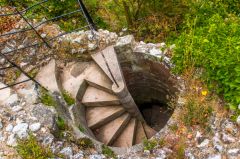 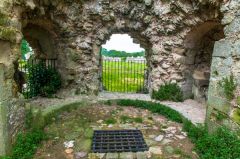 More self catering near Pevensey Castle >>