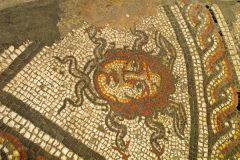 The Corinium Museum in Cirencester, Gloucestershire, has a couple of interesting new features which will be of especial interest to families. See if you or your children can solve Anglo-Saxon riddles, or come to enjoy a new smell exhibit based on Roman aromas.

The Corinium Museum tells the story of the old Roman settlement that was the historic forerunner of modern Cirencester. The museum has a rich display of Roman and Anglo-Saxon finds from around Cirencester and the south Cotswolds area.

Two new exhibits have been added to the museum's hands-on, interactive displays. The first is a fascinating exhibit which asks visitors to solve three authentic Anglo-Saxon riddles. The riddle exhibit emphasizes the important role played by riddles, stories, and songs in Saxon social life.

Here's a sample riddle for you to ponder:

Wonder formed in waves
Water becomes bone
What am I?

Well, I'm stumped, what about you?

The other new exhibit area is a 'guess the smell' interactive exhibit, which askes visitors to sniff 'smell boxes' containing the aromas of foods that were commonly eaten in Roman times. Then, you can see if you were right, and learn about the food and how it was prepared and used by the Romans in Corinium.

Our family has visited the Corinium Museum and found it a captivating place; there is so much history to see. Now you can smell it as well!

The Admiral Hornblower Hotel and Restaurant is a beautiful privately owned family run hotel in the heart of Oakham. The 17th century farmhouse has been lovingly restored to its former glory and provides a warm …