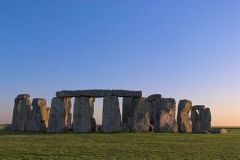 Celebrating the Summer Solstice at Stonehenge has become a pretty big thing over the past several years. An extraordinary number of people come to the stone circle to watch the sun rise over the standing stones on the morning of the solstice. English Heritage, who manage the Stonehenge site, have made special arrangements for this year's Stonehenge Solstice celebration.

1) The last Saturday admission to Stonehenge will be at 1500 hrs.

4) For the information of visitors, sunrise is predicted to happen at 0458 hrs on Sunday, 21st June

Please note that there are special conditions of entry to the Solstice Celebrations at Stonehenge. Full details can be found on the English Heritage website and you can download a pdf document outlining details for visitors.

I would highly recommend planning to arrive well in advance, as in previous years the number of people visiting the site has been astronomically high! For more information read our own article on Stonehenge.