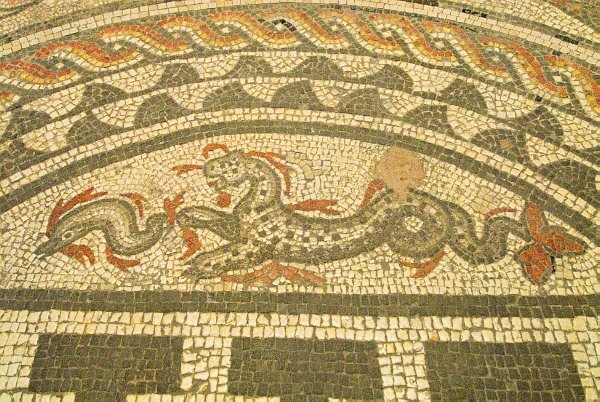 Summary
A jewel in the Cotswold crown, this award-winning museum tells the story of the old Roman town of Corinium, and its evolution into modern Cirencester. A wealth of Roman finds are displayed and there are plenty of hands-on exhibits to encourage visitors young and old to learn about the fascinating history of this region. See a Roman town-house interior, and mosaic floors reconstructed from original finds. 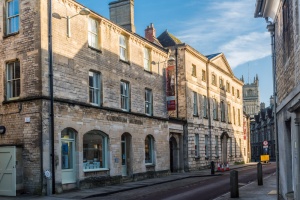 The majority of the Corinium Museum is dedicated to the Roman period of Cirencester's history. Visitors can view a short video giving an overview of the Roman invasion and occupation of Britain, then explore a variety of finds from Cirencester and the surrounding area.

Some notable exhibits include two grave stones of Roman legionaries, a number of reconstructed Roman mosaic floors (see photo gallery for examples), the largest Corinthian column capital in Britain, and the Jupiter Column.

This latter is a Corinthian capital with carvings representing the Bacchus myth, was found in Cirencester in 1838. It has been mounted on a replica sacred column like those found in other parts of the Roman Empire. In addition, there are a number of audio-visual exhibits, quizzes, and hands-on displays to help younger visitors learn about Roman life in Corinium.

Though the Roman period is the best represented, there are some exceptional Saxon artefacts on display. The majority of these are from Butler's Field Cemetery, near Lechlade, and Barton Farm.

The prize of the collection are goods from the grave of 'Mrs Getty', so named because, like the American industrialist J Paul Getty, she obviously possessed great wealth. Here you will see finely worked gold and enamelled jewellery and clothing. Mrs Getty lived in the 6th century and must have been a person of enormous wealth and influence, and her grave revealed one of the richest collections of grave goods ever unearthed in Britain. 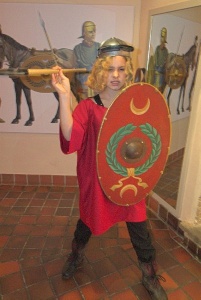 Dressing up as a
Roman soldier

There is a sizeable collection of medieval artefacts from Cirencester, including quite a bit from the ruins of St Mary's Abbey, which stood beside the parish church until it was demolished on the orders of Henry VIII. St Mary's Abbey was one of the wealthiest monasteries in England, and the finely crafted architectural remains are evidence of this wealth.

The final major collection at the Corinium Museum is from the Civil War period. Cirencester was besieged during the war, and aside from exhibits relating to the siege, there are some fascinating hordes of coins that must have been hidden away by their owners during this tumultuous period. One horde was discovered buried inside a pipe at Weston-sub-Edge and consists of 307 silver and two gold coins.

In addition to the permanent exhibits mentioned, the museum has a much smaller space devoted to temporary exhibits of local art. The above only gives an overview of the wide array of artefacts on exhibit; there is a lot to see, and the exhibits are skillfully arranged and displayed in an entertaining, educational fashion that makes a visit extremely enjoyable.

Our children, aged 6 and 12, had a wonderful time exploring the museum. The audio-visual displays proved a huge hit, especially with our youngest; we practically had to drag her away in the end. A very enjoyable way to spend several hours, especially if the weather is inclement outside.

More self catering near Corinium

More bed and breakfasts near Corinium