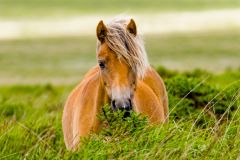 Ponies and Dartmoor seem to belong together, like butter and scones, or Morecambe and Wise (or for those of you who are a bit too young, Ant and Dec). However, the ubiquitous Dartmoor Pony is now officially a threatened species, which is why I thought it worth mentioning the work of the Dartmoor Pony Heritage Trust.

The Trust is a charitable organization founded to preserve the Dartmoor Pony breed.

Dartmoor ponies are a small, sturdy pony bred in the upland areas of Dartmoor for centuries. They were used in tin mining, and when that industry died down, were primarily to wander freely over the moors, grazing wherever they would, though some ponies were used for farm work. In 1924 the Dartmoor Pony Society established a Breed standard which stipulated that to recognized as a Dartmoor pony, an animal could be no more than 12.2 hh (hands high).

The Trust offers a variety of ways for people to get involved in looking after Dartmoor ponies. Members or supporters can 'adopt' a pony, join guided group visits to pony habitat areas, and participate in training wild foals. You can buy ponies, foster a pony, or purchase memorabilia and gifts from the DPHT online shop. The Trust also produced a series of education events and programmes aimed at making the public aware of the historic role played by ponies on Dartmoor.

For more about the work of the Trust, and to investigate the opportunities to get involved in preserving the Dartmoor Pony, visit www.dpht.co.uk.

More:
Dartmoor on Britain Express
Photos of Dartmoor (includes photos of ponies in the wild)