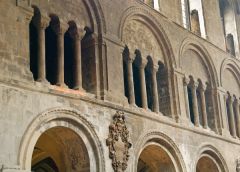 Despite its long and rich history, medieval attractions in London are a bit thin on the ground. There's a reason for that, of course; the Great Fire of 1666 destroyed most of the old medieval buildings in the historic city centre of London, so much that remains is of Stuart date or later. But despite that, there are some fantastic medieval sites to see, including some you may not have heard of.

There are fairly obvious medieval 'name' attractions that most people will immediately recognize.

Chief among these must be the Tower of London, begun by William the Conqueror. My favourite part of the Tower is the Chapel of St John, an almost perfect Romanesque chapel high in William's White Tower. Also, look for the stairwell where the bones that might have belonged to the Princes in the Tower were found, and the small chapel where Henry VI was murdered.

Westminster Abbey - There was an abbey here as early as the 7th century, but the current building was begun by Edward the Confessor in 1045, and cathedral was consecrated on December 28, 1065. The cathedal was rebuilt by Henry III in 1245. in addition to the medieval structure, Henry VII added a superb chapel in late Perpendicular Gothic style. The striking twin towers of the west front are not medieval, however, they were added by Nicholas Hawksmoor in the early 18th century.
With a very few exeptions, most of the kings and queens of England are buried in Westminster Abbey.

Westminster School - (external link) Located directly behind Westminster Abbey, the school dates to 1179, and is housed primarily in buildings belonging to the medieval monastery at Westminster. The main hall, known simply as 'School', was built around 1090 as a dormitory for the monks of Westminster. The School is not normally open to visitors, but tours can be arranged.

Lambeth Palace - the London residence of the archbishop of Canterbury. Like may medieval palaces, Lambeth is not composed of one building, but a complex of buildings within an outer wall. The oldest part of the palace is 13th century, and was built for Archbishop Stephen Langton. The great gateway entry was built much later, around 1490.

St Bartholomew the Great - one of the few medieval churches left in London, St Bartholomew is approached through a half-timbered medieval gateway. Within, the church features several intriguing historic tombs and monuments, and a superb Elizabethan window looking down upon the nave.

Nestled at the bottom of a secluded driveway Letham House is located just outside the small market town of Haddington in East Lothian. This beautiful area is just a short drive from Scotland's capital city … more >>