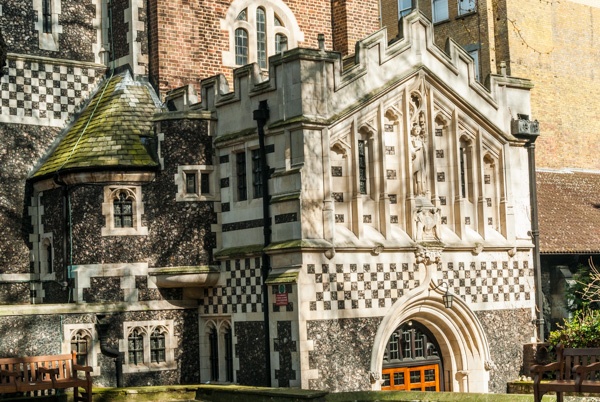 One of the few remaining Norman churches in London. St Bartholomew-the-Great began in the 12th century as the chancel of a monastery on this spot. After the Dissolution of the Monasteries, the building saw use as a stable and factory, before reverting to a church in the 19th century. The entry is a 13th century arch with a half-timbered gatehouse above. 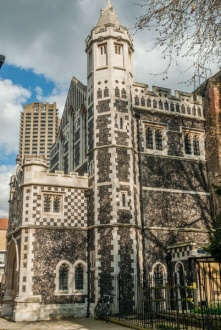 St Bartholomew's was founded in 1123 by Rahere, a nobleman at the court of Henry I. The story goes that Rahere was moved by the death of Queen Matilda and the drowning of Prince William, Henry's heir, and his siblings, to take up holy orders. Rahere made a pilgrimage to Rome, where he fell ill.

In desperation, he vowed that if he recovered, he would return to London and establish a hospital for the poor. He did recover, and as he began his journey home to England he saw a vision of St Bartholomew appear before him, and the saint told him he would guide Rahere to a spot in Smithfield, where he should found a church in the saint's name.

Rahere travelled back to London and there founded a church at Smithfield, outside the old city walls, with a priory of Augustinian canons, and a hospital for the poor. The complex of priory, church, and hospital was complete before Rahere's death, and he served as the first master of the hospital and prior of the Priory. His colourful tomb lies inside the church he founded. 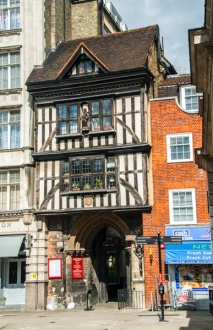 The original doorway
(under the
timber-framed
house)

The Norman chancel and apse survive from Rahere's church, a remarkable reminder of the medieval period, incorporating some of the best Norman architecture in Greater London. The chancel arcade rises to a triforium and clerestory, creating a beautiful, flowing example of the Romanesque style beloved by the Normans.

While Henry VIII's Dissolution of the Monasteries swept away the priory and hospital founded by Rahere, the church was saved from destruction when it was converted for use as a parish church to serve the local community of Smithfield.

Parts of the lady chapel were incorporated into a later private house, and the south door of the nave lives on in the grand entrance gateway to the churchyard area. Parts of the cloister can still be seen. The striking brick tower was added in 1638 to create a more impressive entrance facade.

Since the nave and transepts were pulled down at the Reformation, the interior is a rather peculiar mix of Norman work at the east end and post-Reformation architecture and fittings at the west end. One very unusual feature is a large oriel window projecting over the chancel from the triforium level. 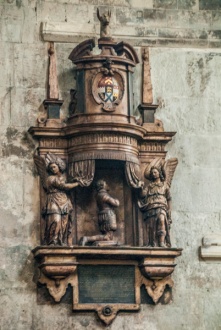 Great St Barts has been used as a setting for quite a large number of films and television productions over the years, from Kevin Costner's Robin Hood, Prince of Thieves, to Shakespeare in Love, The Other Boleyn Girl, and Snow White and Huntsman, to name just a few.

There are very few historic sites in London where the early medieval period has been so beautifully preserved as St Bartholomew the Great. If you are used to the Wren churches that dot the London skyline, then Great St Barts may come as a bit of a shock.

The interior is absurdly beautiful, with the flowing symmetry of the Norman east end offering one of the most attractive historic sights in the city. Thankfully the church is open regularly to visitors; an example for some other churches in the city! 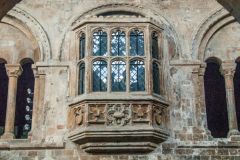 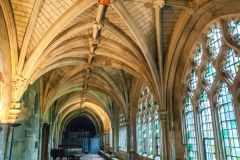 More self catering near St Bartholomew-the-Great >>