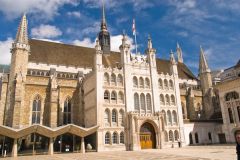 This is the second of two articles on medieval attractions to see in London.  If you missed the first post, don't hang about - read it here! Finished? Now, for the best of the rest.

Prince Henry's Room - a medieval half-timbered building on Fleet Street, forgotten by time. The Room was hidden behind a more modern exterior until construction work revealed a set of medieval chambers. The chambers stand almost directly above the passage leading through Middle Temple to Temple Church, our next medieval destination ...

Temple Church - familiar to anyone who has read the DaVinci Code, this round church dates to the 12th century. It is famous for the recumbent effigies of medieval knights in 'The Round', notably the memorials to Sir William Marshall, father and son. The architecture is simply superb, with grinning gargoyles peering down from the capitals of slender columns built of Purbeck marble. Temple Church stands within the courts of law known as Middle Temple, a maze of medieval and more modern buildings between Fleet Street and the Embankment.

Chelsea Old Church (also known as All Saints) - a little off the beaten track for normal tourists to London, Chelsea Old Church is a lovely building on the banks of the Thames. The church was heavily damaged in the Blitz, and largely rebuilt. The chancel was 13th century, as were the north and south chapels. The church is known for its links to Sir Thomas More, who rebuilt the south chapel as a private chapel in 1528. This largely escaped the bomb damage that so badly afected the rest of the church.

London Guildhall - (external link) - the ancient Guildhall was the traditional seat of London government. It was built between 1411 and 1440. The Great Hall is a huge space, measuring 155 feet in length and 88 feet high. Look for the statues of the mythical giants Gog and Magog above the interior entry of the hall.

Westminster Hall - not generally open to the public, this is the oldest part of the Palace of Westminster (the Houses of Parliament). The walls were erected in 1097, and it is one of the largest medieval halls in Europe without roof support.

Southwark Cathedral - this ancient church was only raised to cathedral status in 1905, but it dates to the Saxon era, though much of what we can see today dates from a rebuilding in 1212. The retrochoir  in particular is a wonderful medieval survivor.

So, despite the fact that much of medieval London was destroyed in the Great Fire (or levelled in the Blitz), there are still some very interesting medieval places to see in the city and its environs.

A stylish, comfortable 10 bedroom hotel in a dramatic Tudor building set in the centre of the ancient and rural market town of Bromyard. Fine dine in the beautiful restaurant, relax in the comfortable lounge. … more >>