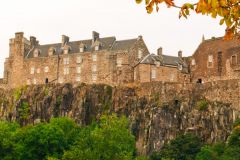 Organizations responsible for operating some of Britain's most historic sites have not always been quick to embrace new technology. That is changing however, and more and more, organizations such as English Heritage and the National Trust are taking advantage of quickly evolving Internet technology to make information more readily available to visitors. One example of this is the increasing use of online video to promote attractions and to keep interested visitors up to date on specific properties. Here's the latest in that line:

A short film on the restoration of historic Stirling Castle can now be seen on YouTube. Historic Scotland is overseeing a massive restoration project to bring James V's 16th-century royal apartments up to date, and viewers can get a sneak online peek at the restoration progress. Historic Scotland is putting £12 million into the project to refurbish the royal apartments and create a major new visitor attraction at the heart of Stirling Castle.

The film is the first in a planned series highlighting the restoration project, and the work of the traditional craftsmen and women who are decorating, furnishing and fitting the palace using many of the same skills and materials as their predecessors in the early 1540s. Stirling Palace is slated to re-open to the public at Easter 2011.

The film, called Stirling Castle Palace – A Renaissance, was made by Mike Brooks of Historic Scotland’s in-house photographic unit, as part of the wider work to fully record each stage of the restoration project.