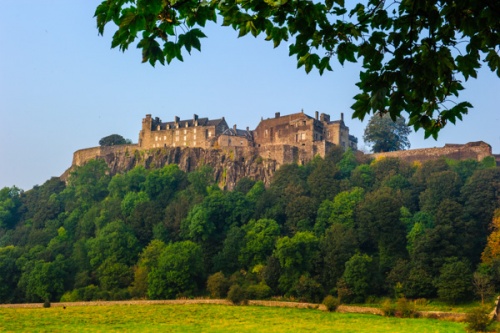 The stories of Scotland and Stirling Castle are inextricably intertwined; the castle has played host to some of the most dramatic and important events in Scottish history. It has been a military stronghold and a royal palace, a place of coronation and celebration, and it overlooks the sites of two pivotal battles for Scottish independence; Stirling Bridge and Bannockburn.

Stirling Castle stands atop a high cliff of volcanic rock, overlooking the lowest crossing point on the River Forth. We do not know exactly when the castle was begun, but the first written record comes from 1110, during the reign of Alexander I. Alexander founded a chapel in Stirling Castle, and died here in 1124.

Because of its strategic importance as a transportation hub, Stirling was fought over again and again during the Scottish wars of Independence with England. Two of the most important battles in Scottish history were fought almost within the shadow of its walls. The first was William Wallace's victory at Stirling Bridge in 1297, and the second was Robert Bruce's decisive victory at Bannockburn in 1314.

Stirling became a favourite residence of late medieval monarchs. James IV enlarged and strengthened the castle, but his major contribution was to create a sumptuous Renaissance Palace within the medieval walls. Mary, Queen of Scots was crowned at Stirling Castle, and her son, the future James VI, was baptised at the nearby Church of the Holy Rude. Twenty-eight years later, James himself hosted a banquet in honour of his own heir, Prince Henry. 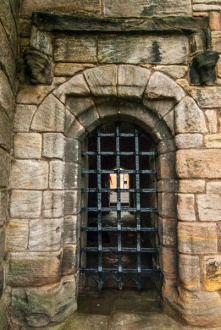 A barred gate at the
castle entrance

Here are the major sections of Stirling Castle open to visitors:

Built for James IV around 1503, the hall at Stirling is the largest medieval hall in Scotland, a place for both feasting and receiving important guests in style.

The Hall was part of major building work at the castle, aimed at creating an impressive venue for royal gatherings, and no doubt to impress James' new queen, Margaret Tudor.

The hall is arranged with a high dais at one end, where the royal couple sat in state, and no fewer than 5 fireplaces provided heat. The Hall was famously used for a pair of royal baptism celebrations.

The first was in 1566 when Mary, Queen of Scots celebrated the baptism of her son, the future James VI. Celebrations lasted three days, and culminated in a fireworks display; the first ever held in Scotland. The second baptism celebration came in 1594 when James VI held a lavish gathering in honour of his son, Prince Henry.

The Hall saw more practical use as a military barrack in the 19th century. The military continued to use the Hall until 1964, but after they left it was restored to its original 16th-century glory, a process that took 35 years to complete.

The exterior is an ornate example of Renaissance style, but that is only a taster for the luxurious interiors that await. The palace at Stirling is one of the most complete and best-preserved examples of a Renaissance building in Britain.

It is presented as it would have looked shortly after completion in 1545, with richly decorated rooms hung with tapestries and decorated with statues. There are six main rooms open to visitors and their intent is obvious; James IV and his queen, Mary de Guise, wanted to awe and impress their visitors with their power, wealth, and sophisticated taste. 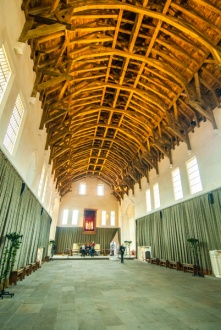 Inside the Great Hall

The Stirling Heads are a series of beautifully carved and painted bosses that decorate the ceiling of the Inner Hall. The heads in the hall are replicas, but you can see many of the originals in a special gallery on the top floor of the palace.

The heads depict a number of themes, from royalty to 'Worthies'; characters from history, from the Bible, and from myth who embodied the virtues of chivalry.

There are several Heads depicting Roman emperors, including Julius Caesar. James IV must have been particularly fond of the Hercules myth, for the Classical hero is depicted on 4 Heads.

There are also several Heads representing members of the royal court, including the royal Jester. These Heads give an excellent picture of contemporary fashion and costume.

Built by James IV for the baptism of his son Prince Henry in 1593. The chapel was one of the first Protestant kirks in Scotland. The chapel was redecorated in sumptuous style for Charles I's coronation visit in 1633, with an ornate frieze by painter Valentine Jenkin. The frieze features a trompe l'oiel window and a depiction of the Honours of Scotland.

This area has been restored to show how it would have looked during the reign of James IV, with tableaux showing preparations for a great feast. The kitchens were more than just a fireplace or two where food was cooked; they were a complex of rooms for storage, preparation, and cooking of vast quantities of food. As large as the kitchens appear now, they were originally even larger.

From atop the battlements of Stirling you can look out over two of the most important battlefields in Scottish history, Stirling Bridge (1297) and Bannockburn (1314).

This prestigious regiment was formed in 1881 by combining the 91st Foot (Argyll) and 93rd Foot (Sutherland). Stirling Castle was the home of the new regiment, which drew most of its soldiers from the nearby area. The regimental museum is housed in the King's Old Building, created in the 1490s for James IV. Displays cover weapons, uniforms, medals, the regimental silver, and a host of other memorabilia. 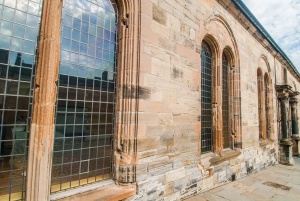 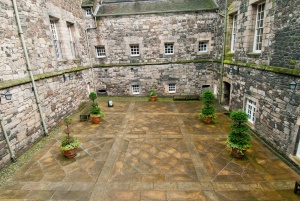 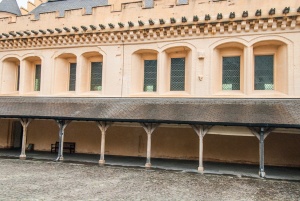 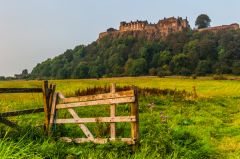 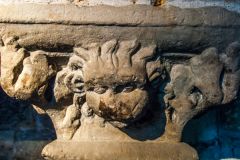 More self catering near Stirling Castle >>