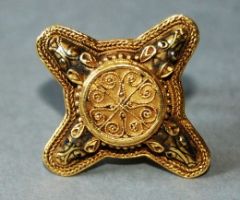 If you've been watching the BBC series 'Digging for Britain' you may have seen a rare Anglo-Saxon ring examined. The ring, which was last shown in public at the Victoria and Albert Museum in London in 1972, is due to go on show at Berkeley Castle, Gloucestershire, for a limited time only. This seems like a great chance to see a unique piece of British history.

The Digging for Britain episode shown on 2 September 2010 will also cover excavations at Berkeley carried out by archaeologists from the University of Bristol. The team has uncovered evidence of a Dark Age monastery on the site built before the castle was constructed in the eleventh century.

Ring Exhibit
The ring will be on display for one month only, from Sunday 5th September – Sunday 3th October 2010.

About the Ring
The gold ring was most probably made during the early years of the ninth century (c. AD 800-830). Its central element (the bezel) is shaped like a cross with rounded ends. At the centre of the cross is a roundel ornamented with extremely delicate filigree, and each arm of the cross consists of what looks like a dog’s head, the tiny eyes set with bright blue and yellow glass, and the muzzles elegantly delineated with a black inlay, niello.

These miniature heads are beautifully detailed, and show superb craftsmanship; experts have compared them to those on the chancel arch of Deerhurst Anglo-Saxon church. This suggests that the ring may have been made locally or by someone familiar with a regional artistic tradition.

According to Leslie Webster (ex of the British Museum) “This is one of the finest and most impressive Saxon rings I have ever seen. It is in wonderful condition; there are virtually no signs of wear, and it looks as if it has just come from the goldsmith. Gold was rare in England at this period and the workmanship is amazing. We have no way of finding out for whom it was made, but whoever that was must have been of great standing and wealth.”

The ring has been among the collections at Berkeley Castle for over 200 years but no-one knows how it got there. The ring complements the work that archaeology students from the University of Bristol have been undertaking in Berkeley to discover evidence of an Anglo Saxon Nunnery on the site where Berkeley Castle now stands. How is business?Resources:
Berkeley Castle can be reached on 01453 810332 or by e-mail info@berkeley-castle.com
Berkeley Castle - official website
Our visit to Berkeley Castle
The lovely photo of the ring that accompanies this post was taken by Mark Horton 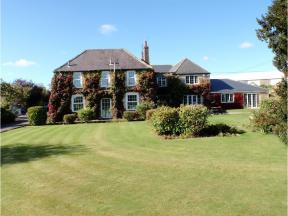 The Shaw Country Hotel is all that you wish for. Whether a casual visitor on business or on holiday you can be assured of the very best personal service from hosts Paul and Nick Lewis. more >>