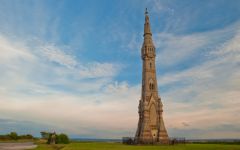 In a departure from the usual format of my 'Secret Places' posts, I'm going to include the entire Yorkshire Wolds region as a Secret Place. When most people think of Yorkshire they might bring to mind York itself, or the Yorkshire Dales, and Herriot Country, or perhaps the North York Moors, or even the picturesque coastline, with Robin Hoods Bay and Whitby.

Few people would immediately think of the Yorkshire Wolds, and that's a shame, as the Wolds is a very pretty place, full of interesting historic places to visit. I was lucky enough to spend two weeks in the Wolds last month (August 2010) and enjoyed myself thoroughly.

So if you were to consider a visit, what might you see? Well, for a start, there's the lovely old town of Beverley. An East Riding native described Beverley to me as 'York in miniature', and there's certainly something to that comparison. Like York, Beverley has a wonderful historic minster church; actually, that's not totally accurate, for Beverley boasts not one, but two superb medieval churches.

In addition to the wonderful Minster, there is St Mary's, at the north edge of the old town, which boasts superb medieval carvings, including a 13th-century carving of a rabbit in the guise of a pilgrim that is said to be the model for the White Rabbit in Lewis Caroll's Alice in Wonderland.

You want stately homes? The Wolds has got a few gems; there's Burton Constable Hall, between Hull and the coast, and in the northeast of the region is Burton Agnes Hall, an Elizabethan jewel. I think my visit to Burton Agnes was probably the highlight of my time in the Wolds, though a trip to nearby Sledmere House runs a close second. Just a bit further away, and slightly out of the Wolds proper, is the Baroque masterpiece of Castle Howard.

If you enjoy walking or cycling, the Wolds has a perfect mix of terrain that is not too taxing, not overcrowded, and yet offers some wonderful countryside views. The long-distance Yorkshire Wolds Way runs from the Humber at Hull in a wide, sweeping semi-circle to end on the coast south of Scarborough.

On its journey, the Wolds Way passes the wonderfully scenic and atmospheric ruins of Wharram Percy, the most famous deserted medieval village in England. A short drive from Wharram Percy leads you to Kirkham Priory, a beautifully situated ruined medieval abbey on the banks of the River Derwent.

If you enjoy historic churches the Wolds has plenty - most are detailed in a very useful series of free booklets available across the region, which describe historic highlights of the churches plus opening times. I must have visited several dozen churches over the course of several weeks. I'd say my favourites were at Garton-on-the-Wolds, which has marvellous Victorian murals covering every inch of interior space, Goodmanham, site of the 7th-century conversion of pagan King Edwin to Christianity, and Hovingham, with wonderful Saxon relics.

But that's just the tip of the iceberg of what the Wolds has to offer. For more, see the official Wolds tourism website at Real Yorkshire, or explore the links in this article. Enjoy a visit - I certainly did!