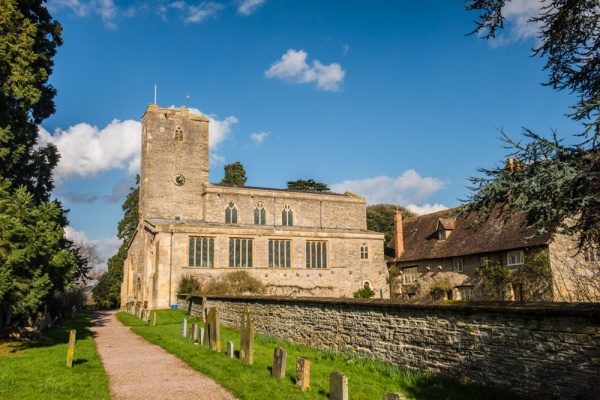 One of the most intriguing and architecturally fascinating Saxon churches still in existence. Deerhurst is unique in that the church is almost entirely Saxon, which a paucity of later additions.

It is rare to see two historic churches so close together; Deerhurst boasts Odda's Chapel (English Heritage) and the delightful Saxon church of St Mary's. The church was founded about the year 800, and later became part of a monastic settlement.

Although the date usually given for the founding of St Mary's is 800 AD, it is quite likely that the church was begun well before that date, perhaps as early as the late 6th century. Deerhurst seems to have occupied a position of importance in the territory of the Saxon Hwicce, a subkingdom of Mercia, and it is possible that the church here was the most important in the region.

Excavations around the church have uncovered ruins of the Saxon monastery, including burial remains dating to the 7th century. Near the east end of the church, a wheel-head cross was unearthed. 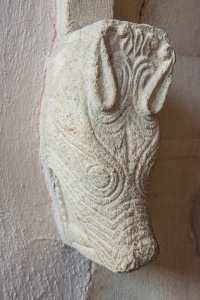 In the year 804 Aethelric, son of King Edmund of the Hwicce, granted land at Deerhurst to the priory, and he and his father were probably buried at Deerhurst. In 1016 Edmund Ironside and Cnut (Canute) chose Deerhurst to sign a treaty dividing England between them. And in the 11th century, Deerhurst was the home of Earl Odda, one of the most powerful of Edward the Confessor's nobles.

Odda was responsible for the chapel which bears his name, which was completed shortly before his death in 1056. After Odda's death, the priory lands were given to the monastery of St Denis, in France, and the chapel passed into the hands of Westminster Abbey. The monastery was later granted to Tewkesbury Abbey, but at the Dissolution of the Monasteries the priory was disbanded and the church became the parish church.

Beside the church is Priory Farmhouse, which occupies some of the domestic buildings of the medieval priory. It is worth noting that, as early as the church was built, it was not the first building on this site.

Excavations near the apse revealed Roman pottery and indications of a high-status Roman building on the site. It seems logical that the priory church was built on top of, and incorporated bits of, a substantial building that had existed since Roman times. 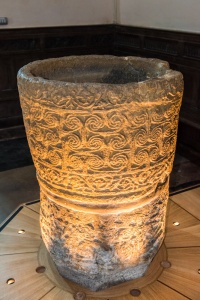 St Mary's is visible for some distance over the fields surrounding the village. There is a small lay-by just outside the church grounds and a car park outside Odda's Chapel a few hundred yards further on. The church is approached by way of a wide path that runs parallel to the wall separating the churchyard and the nearby farm. The farmhouse was once part of the monastic settlement here.

The Angel of Deerhurst

Before entering the church by way of the west door carry on around the side of the building, down a few steps (which actually take you into the farmyard) and around the back of St Mary's. There, set high into the wall of the church, is the famous 'Angel' of Deerhurst, a 9th-century carving in what was originally the apse of the church.

The carving in the interior of St Mary's is quite simply superb. To single out a few of the best features is difficult, but the font is certainly one of the finest I have seen from any time period. Step into the nave and look back up at the west wall (see photo). High on the wall are two pointed windows which show the location of an unusual chapel far above ground level. Sadly, the chapel is not open to visitors.

Set into the floor of the north aisle is a memorial brass to the Cassey family, dated to about 1400 AD. The small dog at the feet of Lady Cassey is named in the inscription ('Terri'), the only case in Britain where a family pet has been named on a funerary brass. 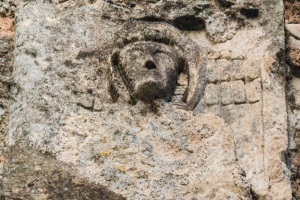 The Angel of Deerhurst

A painted figure high on the east wall of the nave was recently uncovered; it is thought to be 10th century, which would make it the oldest wall-painting in Britain.

Over 25 Saxon carved stones and sculptures have been identified in the church. Among these are:

Whew! That's a LOT, and it gives you some notion of just how many Saxon features remain at Deerhurst. Of these, my favourite is the elaborately carved font, an absolute riot of interlace decoration and fabulous carving. There is such a fantastic vitality about the carving, as if the font will come to life at any moment.

If you enjoy history and Saxon architecture, it is hard to beat a trip to Deerhurst - highly recommended. 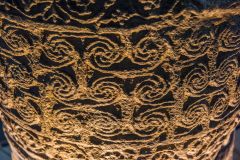 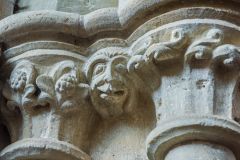