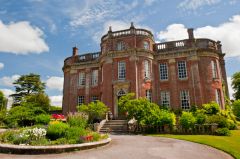 Welcome to the fourth installment in this year's British Heritage Awards. We've had websites, we've attractions large and small, and now its time to turn our attention to those organisations charged with protecting, promoting, restoring, and celebrating British Heritage. The specific focus of this award is to recognise government bodies, large organisations, and national charities that excel in this area - there are plenty of small enthusiast groups such as local history societies that do a wonderful job on a small scale - perhaps that would be a good award to add next year.

But for now, let's look at those national and regional groups that deserve special mention for their role in promoting heritage across the UK.

Herewith the shortlist of candidates for the Best Heritage Organisation 2010 ...

And the winner of the Britain Express British Heritage Awards Best Heritage Organisation 2010 is ...

English Heritage
I am extremely impressed with the continued improvements that English Heritage makes in their website, the information they make available to interested users, and the printed guides and materials that explain the sites in their care. They seem to be continually launching new initiatives to better explain heritage, and make history more interesting and accessible to young people.

Churches Conservation Trust
The CCT is probably the smallest organisation on this shortlist and I greatly suspect that it has the least resources. However, I can't speak highly enough of the work that the Churches Conservation Trust does in preserving historic churches around England. One of the things I enjoy most about visiting a church in the care of the CCT is that they often have extremely informative and well written printed guides, and very useful signage that does a lot to explain the history of the building and the people who lived and worshipped there.

Historic Houses Association
One of my favourite heritage organisations, the HHA includes the finest historic houses in private hands throughout Britain. Among its members are some of the best known historic visitor attractions, but also some little known gems that are rarely open to the public. As they rightly point out on their website, 'The HHA represents more properties open to the public than the National Trust and English Heritage put together'. That's a lot of heritage!

The Talbot Hotel is a traditional 16th century coaching inn and has been recently refurbished to modern standards throughout. It has a contemporary bar and restaurant which offer a delightful traditional menu and a fine …