Henry II and Thomas a Becket

Henry II (1154-89) was the son of Queen Maud and Geoffrey of Anjou. He took as his emblem the "sprig of broom" of the House of Anjou, which in the French of the day became "plant a genet", or Plantagenet. Henry was a good administrator, but he had a terrible temper, which would get him into trouble. He razed unlicensed castles that had sprung up during the anarchy of the civil war, and reclaimed many of the rights and powers of the crown that had laxed.

Becket
Henry's carousing chum and chief administrator was a cleric by the name of Thomas Becket (sometimes wrongly called Thomas a Becket). When the See of Canterbury fell empty in 1162 Henry convinced a very reluctant Becket to become the new Archbishop.

Henry II and Thomas a Becket

Henry, of course, assumed that his friend would be sympathetic to the royal cause in the escalating battle between church and state. He wasn't. Thomas underwent a change of character as Archbishop. He was ostentatiously severe and strict in his observance of church law. He wore a penitential hair shirt under his vestments, and had his underlings flog him frequently. More importantly, he opposed Henry over the question of the supremacy of ecclesiastical courts. (See The Constitutions of Clarendon)

Criminous Clerks
At that time anyone in orders could only be tried in church courts. In practice, the number of clerics was huge, including several levels of lay priests and clerks. Henry, anxious to assert the power of royal justice, claimed that the "criminous clerks" should be tried in royal courts. To his surprise, Becket refused to agree.

Becket's Death
The Archbishop fled to France after defying Henry. They eventually were reconciled with the aid of the pope, and Becket returned. He immediately infuriated Henry by excommunicating those bishops who had prudently supported the king during Becket's exile. Henry flew into one of his famous rages. Four knights, perhaps seeking to curry favour with the king, rode from Westminster to Canterbury and killed Becket in front of the main altar of the Cathedral when he refused to relent.

Henry's Penance
Henry, full of remorse, did penance imposed by the pope. He walked to Canterbury Cathedral in sackcloth and ashes and allowed himself to be flogged by the monks there. He also gave way for the moment on the question of court authority. 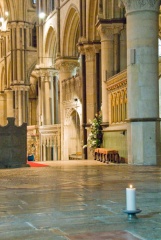 Consequences of Becket's Death
Becket's martyrdom did Canterbury Cathedral no harm at all. In a very short time, miraculous cures began to be reported at his tomb. The old Cathedral burned down in 1174, and it was the growing popularity of Becket's shrine as a place of pilgrimage that paid for the rebuilding. Much of the magnificent Cathedral that we see today was built on the proceeds of gifts and the sale of "official souvenirs" at the shrine during the next few hundred years. Canterbury became one of the most visited pilgrimage sites in western Christendom.

Legal Reforms
Henry introduced several major reforms. Prior to 1166 trial by ordeal was a common way of determining guilt or innocence in criminal cases. Under this system, an accused person might have to pick up a red hot bar of iron, or pluck a stone out of a boiling cauldron. If their hand had begun to heal after three days they were considered to have God on their side, affirming their innocence. One has to wonder how many "not guilty" verdicts were rendered by this system!

Henry replaced this rather painful system with a jury of 12 men. He also introduced the first personal property tax. At the same time, he forced Wales to at least nominally acknowledge the sovereignty of the English crown.

The Devil's Brood
Henry was not so lucky in his family life. He was married to the forceful Eleanor of Aquitaine, and in their squabbling she turned his sons Richard, John, and Geoffrey against him. The "Devil's Brood" intrigued, fought,and rebelled against their father. In the end, the crown went to Richard while John "Lackland" received nothing. Geoffrey received even less; He died before his father.

Related:
The Constitutions of Clarendon
Medieval Britain - from 'A History of the British Nation' (1912)
Medieval attractions in Britain (places to see tagged with 'medieval')