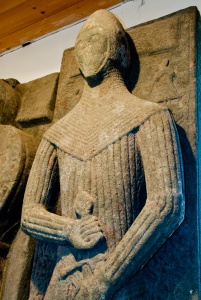 Effigy of a knight, Iona Abbey

Knights
After the lord on the social ladder came the knight. The path to knighthood began at the age of seven when a vassal sent his son to the lord's house to become a page. For seven years a page was cared for by the women of the house, who instructed him in comportment, courtesy, cleanliness, and religion. At 14 the page became a squire, a personal attendant to a knight. From the knight, he learned riding and all the skills of war, as well as hunting, hawking, and other sports.

The Knightly Code
When he was judged ready (generally between the ages of 18 and 21) the squire was knighted in a religious ceremony after spending the night guarding his armour before a church altar. He had to swear to the knightly code which asked him to "protect the weak, defenceless, and helpless, and fight for the general welfare of all."

This code was rarely lived up to, but it remained the standard for chivalry and proper behaviour amongst the nobility for centuries. In theory, the squire could be knighted on the battlefield for exceptional valour, but this event was much rarer than Hollywood would have us believe.

Fighting
Battles were usually small affairs, fought between the knights of individual lords. The object in a fight wasn't necessarily to kill an opponent, but to capture and ransom him. Your foe was worth more to you alive than dead. 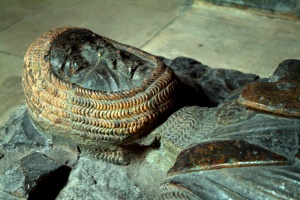 Tournaments
Imported from France in the 12th century, tournaments were an essential part of military and social life. These "war games" consisted of individual contests (jousts), and group combat. Lances and swords were blunted, but tournaments were a place where reputations were made, so the fighting was hard and dangerous.

Prizes were given to the winners, and some knights, such as the famous William Marshall, made their fortunes on the tournament circuit, much as a modern rodeo rider might in the American West.

The armour worn in tourneys was different from regular battle gear. It was very heavy and padded inside. It was also extremely cumbersome.

The object of the tourney was simply to unhorse your opponent, though often the fighting was so fierce that men were killed. Challengers erected tents at one end of the ground and hung a shield outside. A knight accepting the challenge rode up and touched his lance to the shield. The winner of the jousts was awarded a prize by the Queen of Beauty, elected for the occasion from amongst the women present.

By the 14th-century tournaments became rousing fairs complete with singing, dancing, and feasting which might last for several days.

Related:
Back: Medieval Schools and Universities
Next: Town Life in the Middle Ages