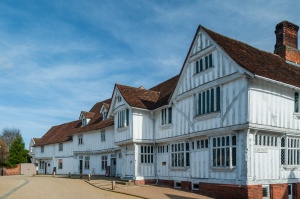 Towns
A new class emerged during the Middle Ages; the merchant. The growth of trade and the merchant middle class went hand in hand with the growth in towns. Town populations swelled during this period, particularly after the Black Death. Trade routes grew, though roads remained poor and dangerous, so most goods were transported by water.

Towns were built on trade, and the elite of towns were the merchants. Merchant guilds controlled town government, though they often clashed with craft guilds for power. Merchants needed stability for trade, so they supported the king and the establishment of a strong central government against the rule of individual nobles. The king, for his part, encouraged the growth of towns and trade. Town charters became a major source of royal revenue. Eventually the growth of towns and guilds led to the breakdown of the manor-centred feudal society.

Merchant Guilds
Guilds controlled the trade in a town. Merchant guilds regulated prices, quality, weights and measures, and business practices. The power of the guilds was absolute in their domain, and to be expelled from a guild made it impossible to earn a living. Each guild had a patron saint, celebrated religious festivals together, put on religious plays, and looked after the health and welfare of the members and their families. 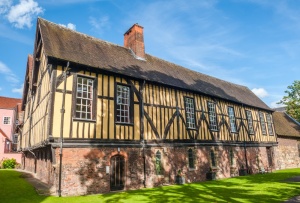 Craft Guilds
Separate from the merchant guilds were the craft guilds, which regulated the quality, working hours and conditions of its members. There were three levels of craftsmen; masters, journeymen, and apprentices. Parents paid a fee to place a boy with a master craftsman as an apprentice. There he received food, lodging (often sleeping under the counter in the shop itself), clothes, and instruction in the craft.

Apprentices, Journeymen, and Masters
The period of apprenticeship lasted for 2-7 years, after which time the apprentice became a journeyman. The term has nothing to do with traveling; it comes from the French "journee", (day), and meant that the journeyman was paid by the day for his work. After several years as a journeyman, the craftsman would submit a piece of his best work to the guild for approval. If this "master-piece" was accepted he could become a master craftsman and own his own shop.

All townsmen were free, and this provided some incentive for serfs to run away to the towns. If they could remain there for a year and a day they were considered free and could not be compelled to return to the manor.

Streets
Before Edward I all repairs to streets were the responsibility of adjacent householders. After Edward's time, town councils began to take over more responsibility. New roadways were often built directly on top of the old with little attempt to clear it away. Thus repairs never lasted long. There was also the possibility that a citizen would build his section higher than his neighbour. Because of this practice street levels rose and rose. In London, the original Roman roads are buried up to 20 feet beneath the street level of today.

Roads were narrow, and tradesmen and householders were constantly encroaching on them. Traffic moved slowly, not least because tolls at the town gates were often paid in kind (that is, with goods rather than money), causing delays and long lineups.

Cleanliness
Sanitation was a constant concern. Open drain channels ran along the sides or down the centre of the streets. Many stables opened out onto the streets and muck heaps encroached on passage. People often threw dirty water out of windows in the general direction of the drains. Dyers' vats were particularly noxious when they were emptied into the street. Again the onus was on the individual householder to keep the space in front of his house relatively clean. In practice, the only real incentive to do so was an outbreak of the plague or a visit of the King.

Livestock in the Streets
Pigs were another nuisance in the streets. Most people kept pigs. They were cheap, and a good source of food. However, houses were small and gardens even smaller, so pigs were often let out into the streets to forage. Stray pigs were such a nuisance that they were liable to be killed and the owner charged for the return of the dead animal.

Law Enforcement
Law and order in the town was enforced by the beadle or constables, who could call on citizens to form a night Watch. If a "hue and cry" was raised to chase a criminal all citizens had to join in or risk being fined. The penalty for the crime was much higher. A thief found in possession of stolen goods was hanged.

Sanctuary
If a fugitive managed to reach a church they could claim the right of sanctuary there for a period of 40 days. This meant that someone would have to stand watch outside the church for the entire time to ensure that the fugitive did not escape, a duty that no one wanted. Towns could even be fined if the felon escaped. At any one time in the Middle Ages, it has been estimated that there were as many as 1000 people in sanctuary throughout England.

The Curfew Bell
Curfews were imposed in towns to keep the peace. Originally the "curfew bell" was rung at 8 or 9 o'clock in the evening to indicate that it was time for smiths, brewers, and taverners to cease their working day. It became the custom that anyone abroad after that had to carry a light and have a good excuse for being out. The carrying of weapons was carefully regulated, especially where foreigners were concerned. Nobility, as usual, were exempt from these regulations. There were also laws prohibiting the wearing of masks in the street; this after an attempt on the life of Henry IV by some nobles disguised as Christmas mummers.

Fire
Fire was the constant fear of town dwellers. Due to closely packed wooden houses and inadequate water supply, fires were difficult to control and could produce widespread damage. There were other factors that increased the risks of fire; Beds were of straw and were commonly kept close to open hearths for warmth. Roofs of reeds, rushes and straw were common. It was only after 1213 that these materials were forbidden in London in favour of tile and shingles. Other places were slow to follow London's lead. 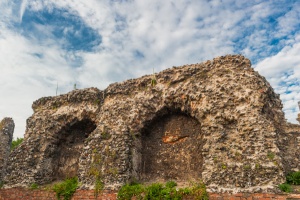 Wooden and Brick Buildings
Although stone building was encouraged, expense meant that most houses were built of wood up until Tudor times. Then, the flourishing new brick industry and a rapidly falling timber supply swung the tide away from wood as the material of choice for most domestic building. Cooks, barbers, and brewers were heavily regulated because of the risk their fires posed. Their premises had to be whitewashed and plastered inside and out.

Each householder was required to keep a full vessel of water outside his door in summer, due to fire risk. When fires did occur it was every citizen's duty to come running with whatever equipment they had. Often firehooks were used to haul burning thatch off a roof, and also to pull down adjacent buildings to provide a firebreak.

The Town Day
The day officially began with the ringing of the Angelus bell at 4 or 5 o'clock. It announced the first mass of the day and the end of the night watchman's duty. Most shops opened at 6 AM, providing plenty of early morning shopping before the first meal of the day at 9 or 10 AM.

Market Hours
Morning was the active time for markets. Things quieted down after noon, and most shops closed at 3 o'clock. Some kept open until the light faded, and others, such as the barbers and blacksmiths, were open until the curfew bell sounded. Foreign merchants were heavily regulated. They had to wait two or more hours before they could enter the market, giving the locals the best of the business.

Markets were noisy, raucous affairs. Merchants had to "cry the wares" as their only means of advertising, and some had to be fined for forcibly grabbing hold of passers-by in their enthusiasm to make a sale.

Saturday was early closing day for shops. Noon was usually the close of business. Sunday, however, the "Lord's day of rest", was not kept as restful as we might think. Some trades were allowed to work after Mass, and some field work was allowed to be done before it. A few places even had the privilege of Sunday markets.

Bells and Criers
Bells were the main medium of telling time and making announcements. A Common Bell was rung to summon civic meetings, courts, and as an alarm in case of fire or attack. The town crier rang a hand bell when he walked throughout the town declaiming news and proclamations. The criers were the main source of news for town dwellers. They also had the task of ringing their bells to solicit prayers in memory of people who had paid for the privilege.