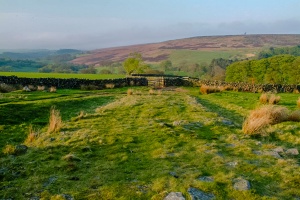 When the Romans began their conquest of Celtic Britain in 43 AD, they found a haphazard collection of roads and paths, most connecting local fields and hamlets, but also some longer distance trade routes (e.g. along the North Downs in Kent, and the Icknield Way along the Chilterns into Norfolk).

The most vital priority was the movement of troops and supplies from the channel ports of Richborough, Dover, and Lympne to the military centres at London, Colchester, and the front-line legionary forts. The first frontier was set up along a road extending from Exeter to Lincoln, running through Bath, Gloucester, and Leicester. This was known as the Fosse Way, the first great Roman road in Britain. The Fosse Way has been largely adapted for modern highways.

The next military push established a new frontier between Lincoln and York, Wroxeter and Chester, and Gloucester and Caerleon. After these "front-line" roads had been established. The Romans turned their attention to expanding the network of minor roads within their new possessions, to better aid the flow of trade.

By 82 AD the Romans had pushed north as far as a line between the Clyde and the Firth of Forth. During this campaign alone the army built over 60 forts and over 1200 miles of roads. The imperial posting service, used by Roman officials, maintained inns and relays of horses at intervals of 30 to 50 kilometres along the roads.

The minor roads (sometimes called "economic roads") were also built by the Roman army to link economic centres, such as the Mendip lead mines and the Nene potteries, with administrative capitals like Silchester, and the coastal ports. At a best guess, there were between 8000-10,000 miles of roads constructed during the first hundred years of Roman occupation.

There was a third level of roads at the local level, connecting villas, temples, farms, and villages to larger roads and market towns. The full extent of this road building is apparent when you consider that according to estimates by historians, no village or farm was more than seven miles from a purpose-built road!

It is a fallacy to think that Roman roads are always straight. The Roman engineers were no fools - if there was a natural obstacle in the way, the road naturally deviated to go around it.

That said, for the most part, Roman roads were laid out in straight lines between sighting landmarks. Small hills were cut through, and wet ground covered by causeways, or timber embankments.

So, how did the Romans build these famous roads of theirs? The roads were literally highways, raised up on a cambered bank of material dug from roadside ditches. In general, there were three layers. The first layer of large stones was covered by a second layer of smaller stones, then a top layer of gravel or small stones. Each layer varied in depth from 2-12 inches.


The choice of material depended upon what was locally available; in the chalk areas like the Wessex Downs, a mix of chalk, flint, and gravel was used. The paved area was edged with upright stones to provide stability, and the major roads had ditches to each side, about 84 feet apart.

Tracing the course of Roman roads can be a fun activity. Large scale maps help, as does the excellent Ordnance Survey map of Roman Britain. Almost any straight stretch of road is a candidate, and often the roads follow parish boundaries or hedges.

The best unaltered examples of Roman roads in Britain today exist at Wheeldale Moor (North Yorkshire), Holtye (Sussex), and Blackstone Edge (near Littleborough, Greater Manchester). A clue to the existence of former Roman roads is the prefix "street", as in Streatley, or Streatham.