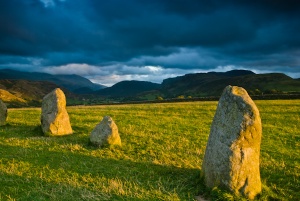 Beaker People
About 2500 B.C. an influx of migrants settled in Britain. These newcomers have been called the Beaker People because of the shape of the pottery vessels which are so often found in their round barrow graves. The stocky newcomers, although few at first, seem to have quickly gotten the upper hand on their Neolithic landlords, becoming a sort of nouveau aristocracy.

The Beaker folk were farmers and archers, wearing stone wrist guards to protect their arms from the sting of the bowstring. They were also the first metalsmiths in Britain, working first in copper and gold, and later in the bronze which has given its name to this era.

How they lived
There was a changeover during this period to round houses, echoed in the mushroom-like growth of stone circles and round barrow mounds. We can guess that huts had a low stone wall for a base which was used to brace wooden poles and rafters. On top of this would have been a roof of thatch, turf, or hides.

They made their own pottery, and eventually the first woven garments in Britain. They also seem to have introduced the first known alcoholic drink into Britain, a form of honey-based mead. The islands have never been the same since.

The Beaker Folk introduced a pastoral pattern to the agricultural lifestyle of Neolithic times. As the population grew, more marginal land was brought into cultivation, and was farmed successfully for hundreds of years, until climate changes forced its abandonment. The Beaker Folk were a patriarchal society, and it is during the Bronze Age that the individual warrior-chief or king gained importance, contrasting with the community orientation of the Neolithic times.

Towards the end of the Bronze Age the climate changed drastically. According to tree ring evidence, a major volcanic eruption in Iceland may have caused a significant temperature drop in just one year. At this time the settlements on Dartmoor were abandoned, for example, and peat started to form in many places over what were once farms, houses, and their field systems. It seems likely that warfare and banditry erupted as the starving survivors fought over land that could no longer support them.

Religion
We've already mentioned the round barrows. They were often clustered in groups which suggest family cemeteries, sometimes very close to earlier Neolithic henges and monuments, as if taking advantage of sites already felt to be sacred. The barrow graves were generally filled with grave goods, indicating the importance of the dead person and a belief in some kind of afterlife. Some of the goods included in barrows were: pottery jars, golden buckles, bronze daggers, cups, necklaces, and sceptres in various stones and precious materials.

Both men and women were accorded barrow burials. A curious fact was noted in studying these Bronze Age burials; in many cases, the corpses were carefully laid with the head to the south, men facing east, women facing west. We can only guess that this was to allow the corpse to see the sun at a particular time of day. Many of the best barrow burials found today are the Iron Age or even Saxon/Norse type barrows rather than Bronze Age.

The other main area of Bronze Age focus was stone circles. Although circles may have been erected as early as 3400 B.C., the major circle building era was during the Bronze Age. This suggests (don't you just love the way historians will never commit themselves?) that The Beaker Folk and their descendants took over or adopted many of the beliefs and customs of the earlier Neolithic inhabitants. Certainly, they had a go at improving the most famous of all stone circles, Stonehenge.