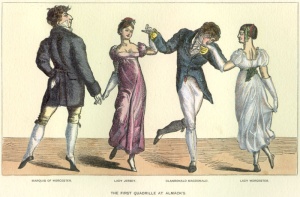 The First Quadrille at Almacks

There, for a subscription fee of 10 guineas, the fashionable men and women of London could attend a weekly Wednesday night ball with supper during the three months that comprised the London social season ("The Season").

The subscription fee was certainly low enough for those aspiring to be considered amongst the ton, but there were hurdles other than financial for admission to the assembly rooms.

Any prospective member would have to face the Patronesses of Almack's, those doughty ladies whose verdict could make or break the social standing of aspiring debutantes with a single word.

For it was as the curtain-raiser for society debutantes that Almack's was famous. Young ladies who would choose among the finest eligible bachelors in London for prospective husbands were nervously presented to the committee of Almack's for acceptance or (horrors!) rejection.

If a debutante was permitted to make her "coming out" appearance at an Almack's ball, her dancing partners were chosen for her by one of the Ladies of the committee.

The ladies who ruled the roost at Almack's were the de-fact queens of London society. They could, and did, arbitrarily decide the social acceptability of anyone desiring admittance to Almack's (and by extension, into London society's highest circles).

They were not easily swayed by social rank or money, either. The Duke of Wellington was once famously turned away from the doors because he was guilty of the double solecism of arriving seven minutes late and wearing trousers rather than knee-breeches.

The members of the committee took it in turns to be the official Patroness of Almack's. At the height of the Regency period, some of the ladies acting as Patroness were Lady Castlereigh, Lady Cowper, Lady Sefton, Princess Esterhazy, the Countess of Leiven, and Sarah, Lady Jersey.

[Update: I've been advised by a knowledgeable reader that the list of patronesses mentioned here comes from a memoir written fully 40 years later, and that contemporary letters mention only Lady Downshire and Lady Bathurst.]

Members of Almack's were permitted to bring a guest into the rooms, but only after that guest, too, had passed the scrutiny of the Patronesses. The members had to bring the guest in person, to meet the Patroness, who granted a "Stranger's Ticket" if she approved of the guest.

The Assembly Rooms were opened for gambling and supper, and dancing which lasted all night. Supper was served at 11 PM, and at that time the doors were closed for good, as the Duke of Wellington discovered to his chagrin.