George III and the Regency Unlike his grandfather, George III (1760-1820) could at least speak the language of the country he ruled, but he was troubled by periods of insanity that rendered him unfit to rule. Several times Parliament considered putting his son (imaginatively named George also) on the throne, only to have the king recover his faculties before the deed was done.

George III's reign saw the loss of the American colonies in the American Revolution (1775-83). Closer to home the Gordon Riots of 1780 began as a protest against the spectre of Catholic emancipation and ended with London in the hands of an uncontrollable mob for three days of rioting and violence.

In 1799 the United Irishmen rebelled on behalf of Irish autonomy, but they were defeated at Vinegar Hill. Two years later Ireland was officially unified with Great Britain to form the United Kingdom. In the meantime, the Napoleonic Wars (1793-1815) with France occupied centre stage.

Fighting was sporadic, punctuated by English naval victories at the Battle of the Nile (1798) and Trafalgar (1805), where England's one-armed naval commander, Horatio Nelson, died in action. On land, the armies under the control of Arthur Wellesley, Duke of Wellington, gradually pushed Napoleon out of the Iberian peninsula and brought him to bay at Waterloo, near Brussels, Belgium.

The Luddite Protests
Industrial unrest grew as new machines threw manual labourers out of work. Agitators known as Luddites (after their imaginary leader, Ned Ludd), broke into factories and smashed machinery in an attempt to preserve their jobs. It was a vain attempt. The advantages of the new steam-driven machines were only too clear, at least to the factory owners.

Social Unrest
Contrary to expectation the end of the Napoleonic Wars brought economic disaster, depression, and mass unemployment. The Corn Law of 1815 excluded foreign grain temporarily, which had the effect of driving up prices. Agitation for social reform grew. The government's response to the agitation was repression, and in 1819 at Peterloo, near Manchester, protests were answered by armed force, resulting in several dead and hundreds injured. This "Peterloo Massacre" was followed by the repressive Six Acts, aimed at quashing dissent.

One result of these government moves was the "Cato Street Conspiracy", a rather far-fetched plot to assassinate the whole cabinet, occupy the Bank of England, and establish a new government. The plot was stopped, and when the details became known many moderates turned away from the reformers' cause. (read more on the Cato Street Conspiracy here) 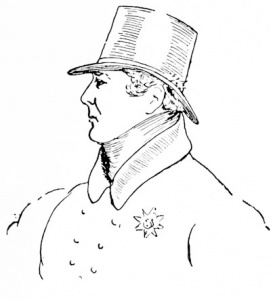 The Regency
It finally became clear that George III was no longer fit to rule, and his son was established as Prince Regent (1810-20). "Prinnie", as he was called by his intimates, was an impulsive, Bacchanalian character, given to extravagance and excess.

However, some of his excesses have become national treasures, such as the Brighton Pavilion, a ludicrously appealing taste of the Far East on the Channel coast. On a personal level the Prince Regent had several mistresses, one of whom, Mrs.Fitzherbert, he is alleged to have secretly married. An underground passage links the Brighton Pavilion with her house close by.

When the Prince Regent finally became king (1820-30), he was at the centre of a public relations fiasco when he tried to prevent his estranged wife, Caroline, from attending the Coronation. Then came a messy and unsuccessful divorce trial, where Caroline came out much the better in popular opinion than the king.

Peel
Under the government of Robert Peel a move began towards legal and social reform. Peel was responsible for the establishment of the first regular police force in London, nicknamed "Peelers" or "Bobbies" after him. The new Corn Law of 1828 relaxed tariffs on foreign grain, and the Catholic Emancipation Bill (1829) gave Catholics the right to vote, sit in Parliament, and hold public office.

Following years saw the beginning of electoral reform. The abuses of previous generations had created a system which was ludicrously unfair and corrupt by modern standards. Voters' qualifications were different in different areas. Some "Pocket boroughs" returned whoever the local magnate nominated. Some "rotten boroughs" had as many members of Parliament as there were electors. This situation was slow to change.

The reign of George's brother, William IV (1830-37), was followed by that of Queen Victoria (1837-1901). Only 18 when she came to the throne, Victoria oversaw England at the height of its overseas power. The British Empire was established in her reign, and it reached its greatest expanse under her. Before moving on to the Victorian Age, however, let's take a closer look at Georgian life and personalities.