The strongest ties in Anglo-Saxon society were to kin and lord. The ties of loyalty were to the person of a lord, not to his station. There was no real concept of patriotism or loyalty to a cause. This explains why dynasties waxed and waned so quickly. A kingdom was only as strong as its war-leader king. There was no underlying administration or bureaucracy to maintain any gains beyond the lifetime of a leader.

The king's powers
Kings could not, except in exceptional circumstances, make new laws. Their role instead was to uphold and clarify previous custom. The first act of a conquering king was often to assure his subjects that he would uphold their ancient privileges, laws, and customs. 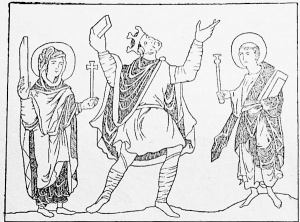 The king and religion
Although the person of the king as a leader could be exalted, the office of kingship was not in any sense as powerful or as invested with authority as it was to become. One of the tools kings used was to tie themselves closely to the new Christian church. The practice of having a church leader anoint and crown the king was part of this move to join God and king in peoples' minds.

Wergelds
The ties of kinship meant that the relatives of a murdered person were obliged to exact vengeance for his or her death. This led to bloody and extensive feuds. As a way out of this deadly and futile custom, the system of wergelds was instituted. The wergeld set a monetary value on each person's life according to their wealth and social status. This value could also be used to set the fine payable if a person was injured or offended against. Robbing a thane called for a higher penalty than robbing a ceorl. On the other hand, a thane who thieved could pay a higher fine than a ceorl who did likewise.

This emphasis on social standing led to an interesting court system. The courts did not attempt to discover the facts in a case; instead, in any dispute, it was up to each party to get as many people as possible to swear to the rightness of their case. The word of a thane counted for that of six ceorls. It was assumed that any person of good character would be able to find enough people to swear to his innocence that his case would prosper.

The role of women
Anglo-Saxon society was decidedly patriarchal, but women were in some ways better off than they would be in later times. A woman could own property in her own right. She could and did rule a kingdom if her husband died. She could not be married without her consent and any personal goods, including lands, that she brought into a marriage remained her own property. If she were injured or abused in her marriage her relatives were expected to look after her interests.