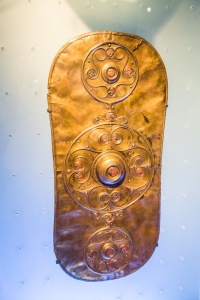 Replica of the
'Battersea Shield'

After the Romans left, the city of London fell into a decline. That's a polite way of saying that the population diminished drastically and large areas of the city were left in ruins.

London's location on the Thames was too good for this decline to continue, and the 7th century saw trade once more expand and the city grow once more.

Early in that century, perhaps in 604 AD, the first St. Paul's Cathedral was founded, on the site now occupied by the present St. Paul's.

By the 9th century, London was a very prosperous trading centre, and its wealth attracted the attention of Danish Vikings. The Danes periodically sailed up the Thames and attacked London. In 851 some 350 longboats full of Danes attacked and burned London to the ground.

The tale of the next century is a confused one, with first English, then Danish, then Norman kings controlling the city. The Danes were ousted from the city by Alfred the Great in 886, and Alfred made London a part of his kingdom of Wessex. In the years following the death of Alfred, however, the city fell once more into the hands of the Danes.

The Danes did not have it all their own way. In 1014 they were occupying the city when a large force of Anglo-Saxons and Norwegian Vikings sailed up the Thames to attack London. The Danes lined London Bridge and showered the attackers with spears.

Undaunted, the attackers pulled the roofs off nearby houses and held them over their heads in the boats. Thus protected, they were able to get close enough to the bridge to attach ropes to the piers and pull the bridge down. There is some speculation that the nursery rhyme "London Bridge is Falling Down" stems from this incident.

The attacks ceased when the Danish king Cnut (Canute) came to power in 1017. Cnut managed to unite the Danes with the Anglo-Saxons, and invited Danish merchants to settle in the city. London prospered under Cnut, but on his death, the city reverted to Anglo-Saxon control under Edward the Confessor. Edward had been raised in Normandy, so his rule brought French influence and trade.

London was now the most prosperous, and largest city in the island of Britain - but it was not the capital of the realm. The official seat of government was at Winchester, although the royal residence was generally at London.

Edward the Confessor was an extremely religious man, and he made it his dream to build a vast monastery and church at an island on the Thames just upriver from the city. He refounded the abbey at Westminster, and moved his court there.

When Edward died in 1065, his successor, Harold, was crowned in the new abbey, cementing London's role as the most important city in England.

What to See:
Westminster Abbey

<< Back Roman London | Medieval London Next >>