The Battle of Flodden 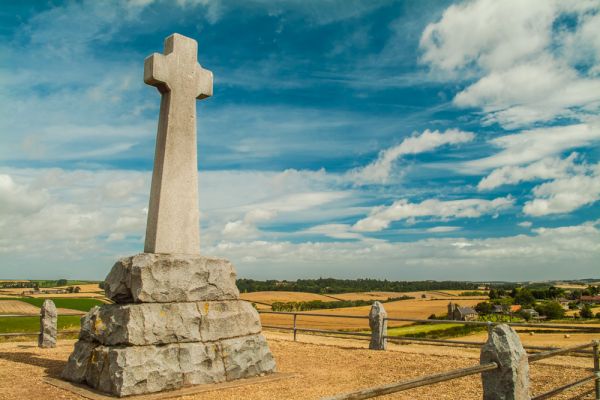 WHO
Scots under James IV vs. English under the Earl of Surrey

WHY
James IV of Scotland, though initially on good terms with Henry VIII (and married to his sister Margaret), held firmly to the "Auld Alliance" with France. Henry, on the other hand, joined The Holy League against France. Even so, James and Henry remained on fair terms until 1513, when Henry invaded France at the head of a large force.

Holding true to his alliance, James led an army into England. His intent was not conquest, but merely to cause a diversion which would bring Henry back from France.

He was met at Flodden by an army of the north under the Earl of Surrey, a veteran of Bosworth Field. Flodden marks a watershed in military history, for it was the last major battle in which the longbow played a part, and one of the first in which artillery played a major role.

THE BATTLE
According to the chivalrous practice of the time, James and Surrey set a time and place to fight. Much to Surrey's disgust, James set up his army in a good defensive position at Flodden Hill, rather than the agreed spot.

Surrey boldly undertook a surprise march that put him between James and Scotland, and James responded by setting up a new position on Branxton Hill. After an opening barrage by artillery on both sides, the Scot Borderers charged down the hill. They initially pushed the English back, only to be repulsed by Surrey's cavalry. The bulk of James army then left their elevated position to join the attack.

The Scots were undone as much by their choice of weapon as by the valor of their opponents; they used the long pike, a weapon introduced to the Scots only recently by their French allies. Though a fearsome weapon against cavalry, at close quarters the long pike was virtually useless, and the Scots were cut to shreds. King James and many of his lords were slain, along with perhaps 5000 of his men.

THE RESULTS
In one stroke, Surrey and his men reduced the Scottish threat to a mere whisper. The Scots posed no further hindrance to the designs of Henry VIII for nearly three decades.