The First Battle of Lincoln

This battle is also known as 'The Joust of Lincoln' 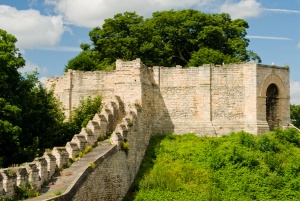 WHY
The contest between Stephen of Blois and his cousin Maud (Matilda) for the throne of England was a messy affair, with first one side then the other gaining the upper hand. A supporter of Maud's cause, Ranulf de Tailebois, seized control of Lincoln Castle and fortified it against attack. The citizens of Lincoln appealed to King Stephen for help.

WHAT HAPPENED
The king duly arrived in Lincoln at the head of an army. Legend tells that he placed his bowmen and siege machines on the west front of Lincoln Cathedral, which faces the castle across Castle Hill. A rebel army under the command of Robert, Earl of Gloucester, Maud's half-brother, came swiftly to counter the siege.

The citizens of Lincoln joined Stephen's forces against the Gloucester's army, but the royal army was overwhelmed. One of the Lincoln men handed Stephen a Danish battle-axe, and the king, to his credit, fought valiantly, but his cause was hopeless, and he was captured. The battle was later popularly called 'The Joust of Lincoln'.

THE RESULTS
The city of Lincoln suffered for its support of King Stephen; the city was sacked, and many of its inhabitants killed by the victorious army under Gloucester. As for Stephen, he was imprisoned at Bristol but was later exchanged for Robert of Gloucester when the Earl was captured by forces loyal to Stephen. Stephen eventually forced Ranulf to surrender Lincoln Castle in 1126.