The Battle of Lincoln Fair 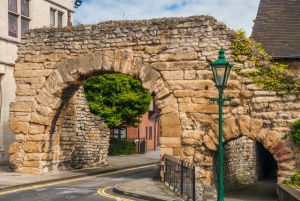 WHY
King John's conflict with his powerful barons was at the root of the conflict known as the Battle of Lincoln Fair. The king was forced by his barons to sign the Magna Carta at Runnymede in 1215. Louis, Dauphin of France, sent troops to aid the barons' cause.

THE BATTLE
William Marshall, Earl of Pembroke, acting on behalf of the child-king Henry III, advanced on Lincoln with an army, arriving in on the morning of 19 May. The French divided their troops, some to continue the assault on the castle, and some to face the advancing royalist army. Marshall's army advanced on two fronts, one advancing into the city by way of the Newport Arch, the other forcing an entry to castle by way of the west gate.

This latter force then deployed crossbowmen on the castle walls and sent down a rain of fire on the besieging French, and killed many of the French knight's horses. The French commander, the Count of Perche, was killed in the melee, and the French troops were put to flight. They retreated through the Bail, down High Street, and into Wigtown, outside the city walls.

According to the contemporary chronicler Roger of Wendover, over 300 knights from the barons' army were captured, but there were only three deaths; the count of Perche, Reginald Crocus, a knight of the king's party, and an unknown soldier fighting for the rebels.

THE RESULTS
The victorious royal army showed little mercy towards the inhabitants of the city. Lincoln was ransacked, and many of its inhabitants brutally killed. Even the cathedral was looted. The victorious royal troops dubbed the short conflict 'Lincoln Fair'. The Battle of Lincoln Fair probably cemented the victory of the royal faction over the barons, though perhaps the baron's success in forcing King John to sign the Magna Carta could be deemed a more lasting success!