The Battle of St Albans 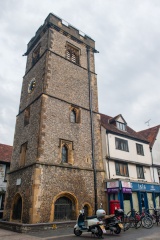 WHO
Lancastrian forces under Anthony Trolloppe (Trollope) vs. a Yorkist army led by the Earl of Warwick (Warwick the Kingmaker)

WHY
The interminable conflict we know as the Wars of the Roses dragged on. Henry VI was captured at Northampton and remained a puppet in the hands of the house of York, and the fight was carried on by Queen Margaret.

Her advisors called for a quick march from York to London to free the king. The Earls of March and Warwick realized the need to prevent them reaching the capitol. Warwick, later called The Kingmaker for his power and influence, headed north from London, bringing Henry VI with him. The two armies met at St. Albans.

THE BATTLE
Warwick seems to have had little advance notice of his enemy's location. Strangely, he established his army in four separate positions stretching from St Albans to Nomansland Common four miles away.

Queen Margaret and her advisors then surprised Warwick by abandoning a traditional frontal attack in favour of a flank attack. In making this plan they were aided by a traitor in Warwick's ranks, a certain squire from Kent called Lovelace, who revealed details of Warwick's position to the Lancastrians.

The Lancastrians marched all night to come upon St Albans at dawn on February 17. They attempted to surprise archers left in the town around the watchtower, but were repulsed. In the narrow streets of the town the arrows of the bowmen proved murderously effective, and it was not until mid-morning that they were silenced.

None of Warwick's other positions had sent help to the valiant archers, and now the Lancastrians were free to deal with the isolated Yorkist positions one at a time. The cold February skies unloosed biting snow, which may have blown in the face of the Yorkist troops and hampered their shooting.

In any event, the Yorkists were badly outnumbered, and their split positions made the task of their enemies comparatively easy. Warwick brought fresh troops into the fray, but then the traitor Lovelace turned on his supposed friends.

In the face of his crumbling lines and obvious defeat, Warwick managed to prevent a total collapse of discipline and prevented the defeat from becoming a rout. He withdrew with some 4000 men, leaving behind King Henry, who was joyfully reunited with Queen Margaret.

THE RESULTS
Warwick retreated to Chipping Norton, where he joined Edward, Duke of York. Tired now of trying to reform the monarchy, Warwick agreed to the coronation of Edward at Westminster as Edward IV. A fresh Yorkist army rallied around the new king, and just a month after the disaster of St Albans came the overwhelming triumph of Towton.