The Battle of Tewkesbury 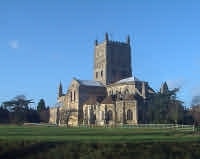 a Yorkist army under Edward IV vs. Lancastrian forces led by the Duke of Somerset on behalf of Queen Margaret

Queen Margaret landed at Weymouth intending to join forces with Warwick. She had only progressed as far as Cerne Abbas when she learned of Warwick's death at the Battle of Barnet. Despite the loss of their leader, the Lancastrians gathered fresh troops and marched north to join with Jasper Tudor in Wales.

Edward IV had let his levies go after Barnet, but he quickly called up fresh men and sped to intercept the Queen and Somerset before they could cross the Severn at Gloucester. For his part, Somerset's army was forced to enter Bristol for supplies and extra arms. The delay this caused was to prove fatal.

Somerset slipped by Edward's army by pretending to fortify Sodbury, only to pull out again. Edward alerted the Governor of Gloucester to hold out against the anticipated attack as long as he could. Then Edward led his men in a beeline towards Tewkesbury, knowing that if Gloucester held firm that Somerset would have to move further north to cross the Severn.

When Somerset arrived at Gloucester he found the gates closed against him. There was no time for sieges; the Lancastrians knew that Edward was close behind them, and they struggled on to Tewkesbury. There was a ford there, a mile south of the great Abbey. But by this time the troops were exhausted and there was no real choice but to turn and fight.

The Battle
Somerset's men actually outnumbered Edward's army by some 2000 men. Neither side had any reserve, but threw all their men into the fight.

Somerset led some of his men on a flanking manouevre, but they were pushed back fiercely. Some reports claim that Somerset became enraged because promised support from Lord Wenlock had not arrived and when he eventually returned to his lines he split Wenlock's skull in rage.

Whatever the truth of this somewhat unlikely tale, the Lancastrians were demoralized by their failure, and when King Edward attacked the centre of their lines, they put up only a token resistance - despite their numerical advantage.

he Yorkist advance pushed Somerset's men back on the town and the river, where many drowned trying to escape. No quarter was given, and as many as 2000 Lancastrians may have died, compatred to about 500 of King Edward's men.

The most vital loss was Prince Edward, the last legitimate descendant of Henry IV. Somerset and his principle aides were tried and executed, perhaps after being taken from sanctuary in Tewkesbury Abbey.

The Results
Queen Margaret heard the news of her son's death and the disaster on the battlefield at Payne's Place, across the Severn. She fled, but was captured and brought before Edward IV at Coventry. She remained a prisoner for four years until ransomed by Louis of France.

Edward's comprehensive victory at Tewkesbury stilled the voices of opposition - at least for a time. The country was weary of war, and for the next 12 years Edward ruled in (relative) peace.

Opening of the Addled Parliament