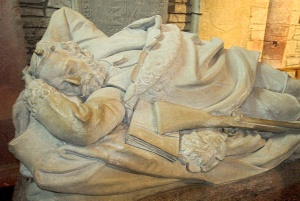 In the north-east corner of St Magnus Cathedral in Kirkwall is a memorial to a man whose name ought to be familiar to schoolchildren and history buffs alike. Yet the name of John Rae is likely to raise no more than a puzzled eyebrow from most observers. Rae is a classic case of the value of good PR.

Rae was born near Stromness, on Orkney Mainland. He studied medicine at Edinburgh and in 1833 became a surgeon for the Hudson's Bay Company. This was the start of Rae's association with the Arctic.

It quickly became apparent to his employers that Rae's skills as an outdoorsman and his undoubted ability with bots made him more valuable as a surveyor and explorer than a simple medical doctor.

In 1846 he made the first of his journeys to the Canadian Arctic, and two years later he was a member of the futile search led by Sir John Richardson to look for the lost Franklin expedition. In 1850 he led a similar expedition and found two pieces of wood presumed to belong to Franklin's ships. In a subsequently published account of his trip, Rae claims that the flooded landscape made a further search at that time impossible.

He returned to the Canadian north in 1853 to survey the geography of Repulse Bay. There he found the first hard evidence of Franklin's expedition. and purchased from local Inuit articles belonging to Franklin. For this discovery, he received a prize of £10,000 from the British government.

Rae also reported tales told to him by the Inuit that explained the demise of Franklin and his men. These tales suggested that the lost party had been driven mad by malnutrition and resorted to cannibalism to stave off starvation.

Rae's stories were derided in the public press - perhaps under the considerable influence of Franklin's widow - and Rae was ridiculed and called a liar. Despite the fact that later discoveries back up Rae's tales of Franklin, the Orcadian's reputation never recovered.

Rae made further journeys through the Canadian north and west, and in 1864 he surveyed the route for a telegraph line through the Rockies from Winnipeg. Over the course of his travels, this vigorous man is estimated to have walked over 25,000 miles through the Canadian wilderness. In 1852 he received the prestigious founder's gold medal from the Royal Geographical Society.

In the climate of his day - and given the Victorian passion for creating heroes of their explorers - it may be surprising that Rae's travels did not earn him the fame and public adulation enjoyed by his contemporaries. We mentioned the bad press he received for reporting negative tales of Franklin, who was at that time a great hero in the Victorian world view.

One other thing worked against him in this respect; he adapted the clothing and lifestyle of the Eskimo and Inuit of the far north. This was a sensible decision, as the natives of the Canadian Arctic had evolved a lifestyle which enabled them to survive their harsh environment far better than European explorers.

But the Victorian mind did not think highly of those who 'went native', and Rae lost considerable respect in the eyes of his contemporary Britons. He would have been much more highly thought of had he stayed staunchly Western European to the last and died doing it.

So despite the honours he received, and the tremendous role he played in opening up the previously unknown (to European minds) the Canadian north, Rae remained largely unknown to the Victorian public. Unknown, that is, except in his native Orkney. His tomb is one of the finest in St Magnus Cathedral, and there is a fascinating display on his life and travels in the Orkney Museum opposite the Cathedral.