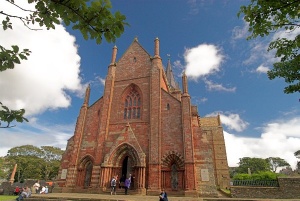 A superb medieval cathedral of red sandstone, located in the centre of Kirkwall. The cathedral was begun in 1137 by Earl Ragnvald-Kali, the nephew of Earl (later Saint) Magnus. The interior vaulting is superb.

When was it built

The earliest parts of the cathedral are built in ponderous Romanesque style, with later additions maintaining much of the earlier motif, but adding in early Gothic architectural detail. The vaulting of the nave is particularly fine. The cathedral is built on a 't' plan, with an aisled nave, crossing, and choir, with a central tower above the crossing. 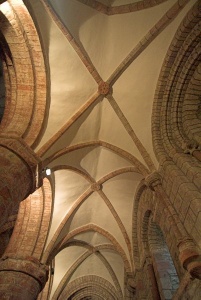 The cathedral as a stable

In 1651 English troops occupied Kirkwall, and used the cathedral to stable their horses. Iron rings were set into pillars in the nave to anchor the horse's tethering straps. These rings can still be seen.

There are numerous tombs and memorial within the cathedral. Most appear in the north and south aisles, where there are quite a number of 17th-century grave markers. These are readily identifiable by their repeated motifs of mortality, such as skull, bones, coffins, and hour-glasses. The most grandiose memorials are placed in the eastern corner of the chancel. Here are the tombs of William Baikie, missionary explorer, and Dr John Rae, Arctic explorer.

Who was St Magnus?

The saint was an early 12th-century Norse earl of Orkney, or, to be more precise, a joint earl, as he shared the earldom with his cousin Haakon Paulson. Joint rule seldom worked, and this case was no exception; the two cousins fought, but in 1116 they agreed to meet on Egilsay to sort out their differences. The terms of the truce specified that each earl would bring only one ship to the meeting.

Magnus held to the agreement, but Haakon brought 8 ships of armed men. Magnus had no escape, and to make his death as insulting as possible Haakon ordered his cook to kill his enemy. Magnus was one of those characters whose reputation seems to grow after his demise, and stories began to spread about his sanctity. 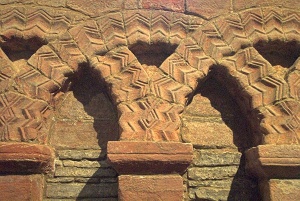 When Magnus's nephew Ragnvald-Kali bid to wrest the earldom from Haakon's son, he vowed to build a church in the memory of his uncle if he succeeded. St Magnus Cathedral is the result of that vow.

St Magnus and Regnvald were both later beatified (made saints), and their bones are interred within pillars of the cathedral choir.

St Magnus Cathedral is one of Orkney's 'Don't Miss' attractions, well worth a visit, and its close proximity to the Earls Palace, Bishop's Palace, and Tankerness House makes for a great afternoon out in Kirkwall. 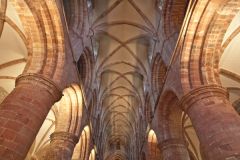 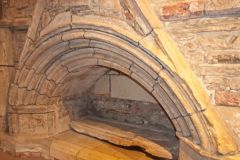 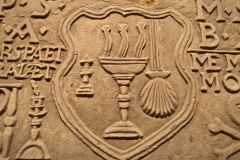 Nearby accommodation is calculated 'as the crow flies' from St Magnus Cathedral. 'Nearest' may involve a long drive up and down glens or, if you are near the coast, may include a ferry ride! Please check the property map to make sure the location is right for you.

Loch Mor, Glendale, Isle of Skye Prints
PUT THE BEST OF BRITAIN ON YOUR WALL